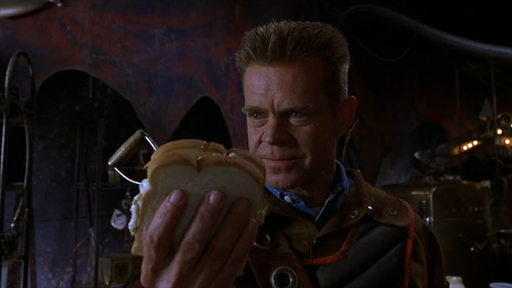 Mystery Men. Dir. Kinka Usher. Perf. Ben Stiller, Janeane Garofalo, and William H. Macy. 1999. DVD. Universal Pictures Home Entertainment, 2010.
Here's a little something fun courtesy of Shakespeare Geek, who mentioned it on his blog on Shakespeare day.
It's a brief clip from a film about, according to IMDB, "A group of inept amateur superheroes [who] must try to save the day when a supervillain threatens to destroy a major superhero and the city."
I haven't seen the film myself (but it sounds a bit like the 2000 film The Specials, so I think I'll enjoy it). But this is clearly the scene where the heroes are up against it and ready to give up. Don't give up on the scene—give it a try:
Well, there's not much of the St. Crispin's speech there, but I still think it's a successful modernization. I'm eager to give the rest of the film a chance. Perhaps there will even be a victor's speech like the one at the end of Richard III.
Links: The Film at IMDB.

And it's currently on Netflix!