Book Note: This Side Idolatry: A Play in Seven Scenes 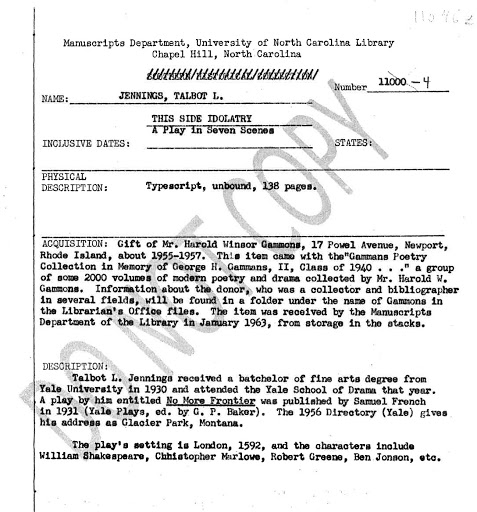 Jennings, Talbot L. This Side Idolatry: A Play in Seven Scenes.  Unbound typescript, circa 1933, Manuscripts Department, University of North Carolina Library, Chapel Hill, North Carolina.Some considerable time ago, I was able to get ahold of a play about Shakespeare arriving in London.
It sat on my desk for about ten years.
But I finally got down to that layer of stratification and glanced through the play.
It's interesting, but it's not earth-shattering. And I'm afraid I can't give you any of it without attempting to get the approval of the estate, and I just don't have the time. You can see from the image above that they make their "Do Not Copy" policy pretty clear on every page (I think I'm justified in providing the image describing the manuscript—just not any part of the manuscript itself).
The reason I requested the play in the first place was that Leslie Howard acted in it (he played Shakespeare), a fact I learned while doing research to debunk the silly claim that Howard was an Oxfordian (for which, c.v.).

This Side Idolatry is worth mentioning since it provides evidence of the continual interest in imagining Shakespeare's biography. And, not to give away too much, its second scene is set in Deptford on May 30, 1593.
Links: More about the production with Leslie Howard.
Copyright 2008-2039 by kj at 10:32 AM