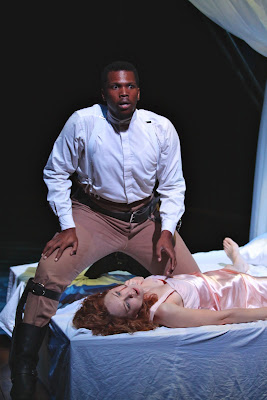 This staging of Othello is very, very good. One of the most affecting devices used in the production is an imagined exchange of vows between Desdemona and Othello. The play opens with the characters introducing themselves. Desdemona and Othello each place their hands on the other's heart and say, "I am your own for ever."

The line is taken from late in the play at the point of Othello putting himself into the hands of Iago:

Othello: Now art thou my lientenant.
Iago: I am your own for ever. (III.iii.480)

The action manifests the way Iago has taken the loyalty Othello had for Desdemona and transferred it to himself.

Chris Gerson's Iago clearly wants the audience to like him—and he succeeds! Gerson uses Shakespeare's words—and, particularly, the humor in the lines—to invite us to participate in his vision. We get the impression that no single motive presented by the text is enough but that the sum of them—together with something undefinable that the audience may be exptected to provide—makes his plan seem to be just on the edge of reasonable.

In Iago, we glimpse the devastating effects of a jealous mind long before those emotions are brought out of Othello's. Indeed, the production at large seems to emphasize the latent or blatant jealousy in each of its characters.

Roderigo (magically played by Andrew Carlson) has his own lusts and jealousies, and he is easily led by them when Iago, the master puppeteer, pulls the strings. Carlson and Gerson have a remarkable chemistry on stage, and that chemistry spills over into the audience. Like Roderigo, we are duped by Iago into participating in the downfall of Othello and Desdemona.

Cassio (Doug Scholz-Carlson) is jealous of his reputation, and Scholz-Carlson puts the anguish of that jealousy into his speech on reputation. There—and elsewhere—the performance is stupendous.
Shanara Gabrielle plays a very strong Desdemona—not only when defending her marriage to Othello in the face of her father's objections but also later, as she attempts to assert her innocence. This strength prevents us from reading her last words as weak and submissive. Instead, it's possible to hear those words—"Nobody; I myself. Farewell" (V.ii.124)—as words of almost implausible forgiveness and mercy.

I wish I had more time to talk about the setting. The stage is stark but beautiful, and a few subtle changes mark the switch from Venice to Cyprus. After the change, the background presents three Arabesque windows with a light cross-hair screen and a doorway with a partially-lowered gate. The shapes pick up and mirror the supports of the upper stage.

Allow me a moment of regret over the loss of one of my favorite lines in the play. The sound that announces Othello's arrival in Cyprus in this production is a bell, not the "Trumpets within" for which the text calls (II.i.177-78.s.d). Because of that technical exigency, Iago says, "The Moor! I know his signal." The line actually reads "The Moor! I know his trumpet" (II.i.178). That may not seems like much of a change, but it eliminates a pun that is entirely in character for Iago. When we hear "I know his trumpet," it's hard not to also hear "I know his strumpet"—an apt polysemy for a moment when Iago's mind is dwelling on Desdemona as a means to undoing both Cassio and Othello. 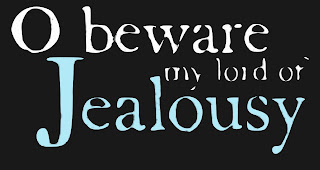 The play ends the expected way: the bed is tragically loaded with three bodies, the silence of Iago hangs heavy over the stage, and the audience is left to work out for itself how it should take what it has just witnessed. Was it entertainment? Was it a warning? Was it an indication of the supernatural once more at work in Shakespeare's drama? Was it an accusation that the heart of each audience member contains the seeds for such jealousy and evil? Or was it some combination of these?

Find out by attending one of the two remaining performances of Othello!
Links: The Great River Shakespeare Festival.
Copyright 2008-2039 by kj at 2:39 PM