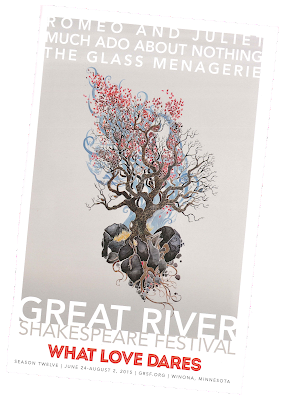 Yes, the question isn't whether they're putting on tremendous Shakespeare. The question is which Shakespeare they're doing tremendously. In fact, that's such a good question, let's set it up among a number of others, FAQ style.

A: Romeo and Juliet and Much Ado About Nothing. Didn't you look at the first part of this post?

A: Ah, there's something you should plan right now. The last show will be on August 2. Here's a handy calendar for your scheduling convenience.

Q: Man! That's only about two weeks left! I'll get my tickets right away! Now, they just just Shakespeare, right?

A: Actually, no.  They're also doing a production of The Glass Menagerie this year. For the past few years, they've done a third show, but you don't hear much about those shows here because of Bardfilm's keen interest in the Shakespeare side of things.

A: Although that might be reason enough, there is a constant stream of other Shakespeare-related material happening in conjunction with the GRSF. Indeed, I was astonished at how much activity there was! There was a symposium (see below for some details), narrated set changes, camps for young actors and designers, an apprentice program (they're doing King John this year), conversations with the actors and directors, film screenings (this year, they're doing Still Dreaming—for which, q.v.), et cetera, et cetera, et cetera.

Q: You've convinced me. I'm off to plan my visit right now. But perhaps you could give me some more details about the plays you saw and the symposium you mentioned?

A: I'm so glad! You won't regret it. And, yes, I'll provide a few loosely-organized comments in discreet categories below.

I always find that I have a huge amount I want to say about the GRSF productions—but I never seem to have enough time. That's partly because I'm busy doing all sorts of other reading and writing over the summer, but it's also because I want to post quickly so that more people can know about the shows and find time to see them. Let me give you just a few points of interest about the symposium and the plays as an entrée en matière to pique your interest and to get you to go to the GRSF.

I thought the symposium fascinating—and, no, not just my section. The GRSF had organized three presenters: Professor John Kerr from St. Mary's University, Christopher Gerson from the GRSF Company (who enlisted the help of fellow actor Benjamin Boucvalt for his presentation), and Yours Truly. Dr. Kerr gave an inspiring presentation centering on the different ways Paris has been presented in film versions of Romeo and Juliet.  My presentation was entitled "Shakespeare: Globe to Globe and Back Again," and it dealt primarily with Johnny Hamlet (for which, q.v.) and Makibefo (for which, q.v.) and what different approaches to Shakespeare in non-Anglophone languages offer us. Mr. Gerson filmed Mr. Boucvalt performing the speech about the apothecary in four different ways to show the differences between playing for the stage and acting for the screen. He then started to show us how he would edit those performances.

It was all completely enthralling—and then came the Q & A time. And that was enthralling, too. The audience (of about sixty people) asked really interesting questions, and we started a fascinating conversation that continued after we adjourned. It was tremendously exciting and entertaining. I certainly will be attending Symposia in the future (and, if I'm honest, I hope to present again as well).

First, it was a great show—well worth watching. The show I attended was sold out, and I gather there have been large audiences for this production.

Much Ado About Nothing

This show, too, was well worth watching, and not just for the thrilling experience of watching Christopher Gerson and Tarah Flannagan play opposite each other. Other scattered thoughts follow:

There's so much more that could be said about the GRSF—but why don't I get some other work done and you find a way to get there to see for yourself?
Links: The Great River Shakespeare Festival.
Copyright 2008-2039 by kj at 7:49 AM