Shakespearean Texts, Texted; or, Texting the Text of the Bard 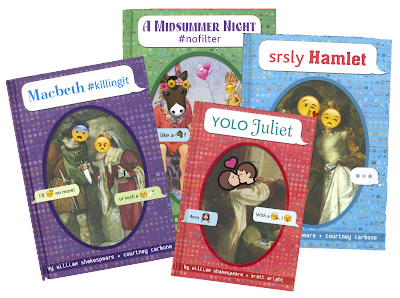 Shakespeare, William, and Brett Wright. A Midsummer Night #nofilter. New York: Random House Books for Young Readers, 2016.
I stumbled across a new series from Random House when browsing through my local bookstore the other day. It's called "OMG Shakespeare," and it retells four (so far) of the plays as text exchanges between the characters.

I'm a bit torn about these books. Clearly, I'm not in the center of the demographic for the books. There are also parts of them that are really bad—by which I suppose I mainly mean "uninteresting." But then there are also very clever ways of grappling with the problems that arise when presenting these stories in this medium. And the kids I've shown these to (kids that I've directed in multiple Shakespeare productions—so they know their Shakespeare, and they also know their Snapchats, their emojis, their Facebooks and Twitters, and their other social medias) really, really like them. They show each other certain pages or comments and they laugh hysterically.

I'll give you some examples from srsly Hamlet. At its worst, it becomes nothing more than a rebus—and even the kids who like these books acknowledge that it's inauthentic—they don't actually text that way. Here's Hamlet's "Get thee to a nunnery" speech:

That can be very tedious and annoying. But then the book will play with the form in a genuinely interesting way, bringing other forms of social media into play. Here are two two-page spreads as an example. First, Polonius gives his advice to Laertes. Then Laertes accidentally tells Ophelia in a group text to remember what he said, giving Polonius the opportunity to put his nose in. And don't fail to note the end of the sequence: Ophelia updates her relationship status Facebook-style. 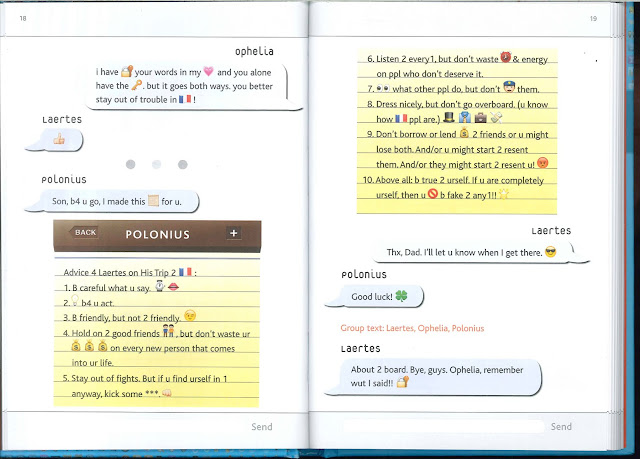 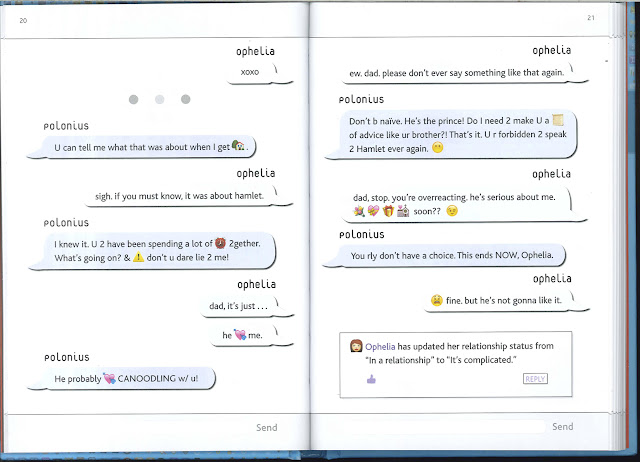 There's some interest and some cleverness in that—and the idea is caught up again after the nunnery scene. Ophelia moves from "In a relationship" to "It's complicated" to . . . this: 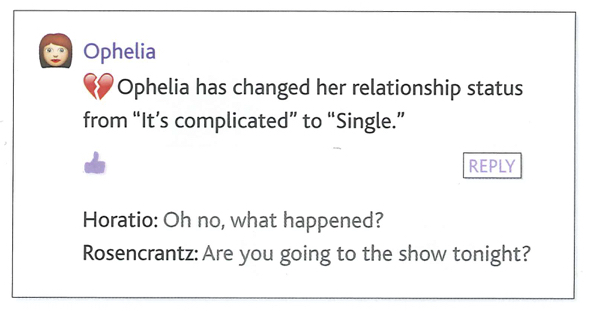 The two reactions also show some depth of thought. Horatio is concerned—probably mostly for Hamlet, but also for Ophelia. Rosencrantz is a bit clueless—he just wants to make sure she'll be at the play-within-the-play.

I also very much—far too much, in fact—appreciated what happens to Ophelia when she goes mad: 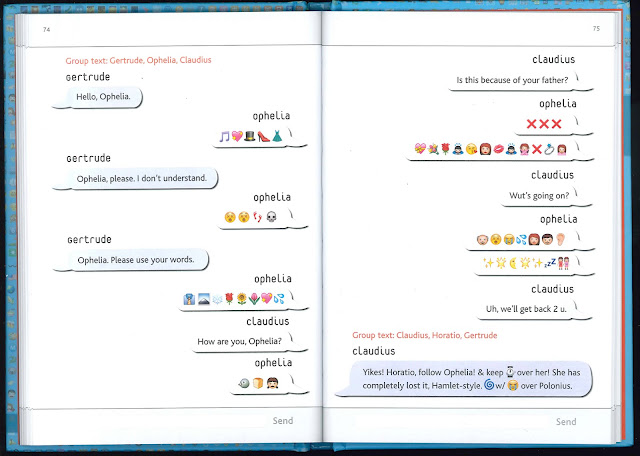 I'm very likely to use that in future courses when we discuss the line "They aim at it / And botch the words up fit to their own thoughts” (IV.v.9-10). I'll invite students to see if they find any correlation between any of Ophelia's mad speeches / songs and the emojis here.

And it's remarkable how, when Laertes enters, having zipped back from Paris, we get the description "Laertes has checked into Elisnore Castle—with Huge Angry Mob," under which is the delightful message "Huge Angry Mob Likes This." 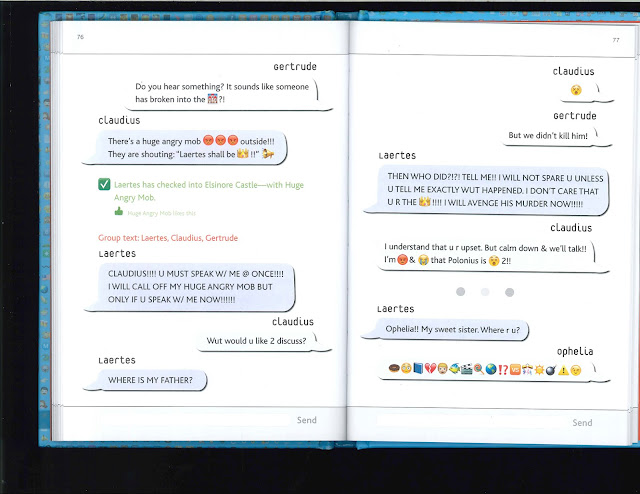 Finally (for that book), the kids were especially tickled by Fortinbras' entrance at the end of the play: In YOLO Juliet, the emphasis is placed on the parents' (and other elders') inability to navigate the world of social media—often with humorous results. One prime example is Friar John's use of all caps—which amounts to shouting—is a sign of his incompetence. In the same exchange, you'll notice that Friar Lawrence initials each of his texts as if they were e-mails or memos: 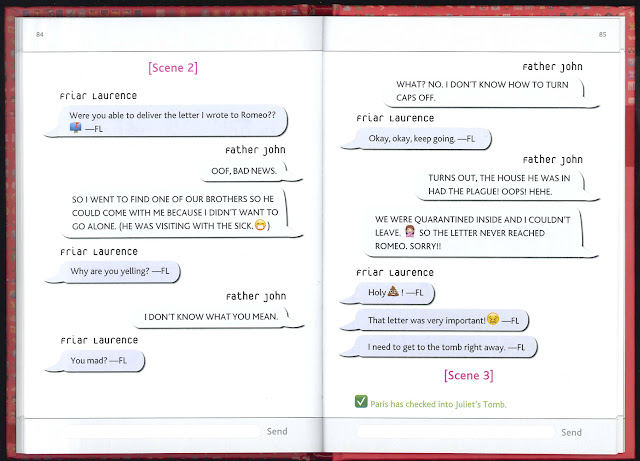 Lady Capulet takes Friar Lawrence's failing one step further. She signs off each text as if it were the end of a letter. In the example below, she also inexplicably "likes" something Capulet is doing: There are also a few other social media things thrown in with pop cultural references to round things out. Observe what Juliet decides to listen to (and the service she chooses to listen to it with) after the balcony scene: 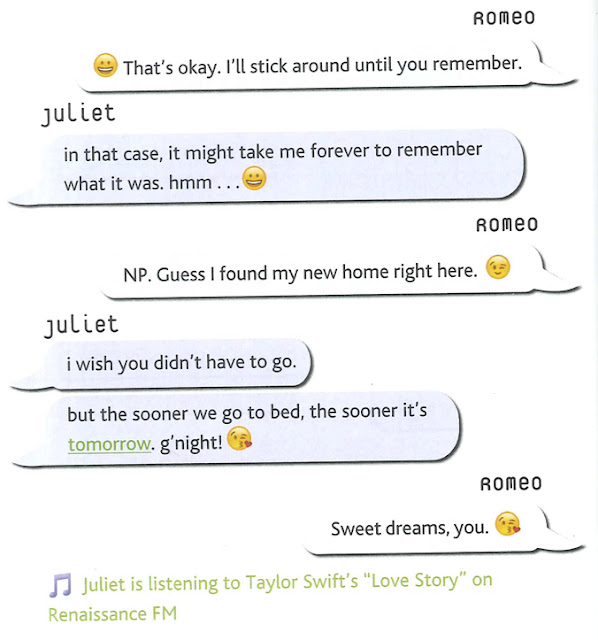 The narrative ends as I imagine you would expect it to—according to Shakespeare. But if you're worried that it's a downer, think again: 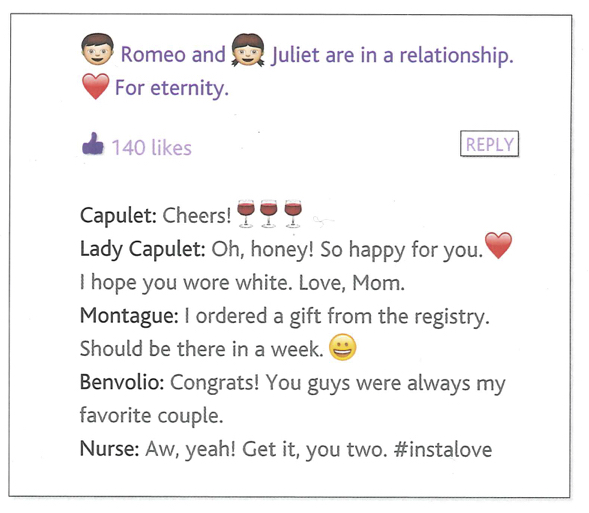 In short, these books demonstrate some intriguing and imaginative uses of social media to tell the stories of Shakespeare—but there's a lot of tedious rebus-esque material there, too. I don't think they would be of much use (or very funny) to those who lack familiarity with the plays. But for those who do (and are in the right demographic), they appear to be a hoot.
Click below to purchase one (or all!) of the books from amazon.com
(and to support Bardfilm as you do so).