Say Hello to Hal from The Hollow Crown 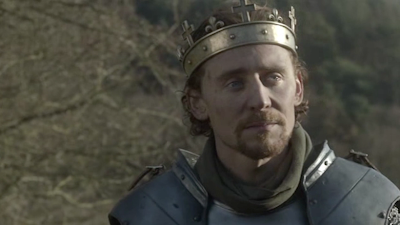 Henry V. By William Shakespeare. Perf. Edward Akrout, Tom Hiddleston, and Tom Brooke. Dir. Thea Sharrock. The Hollow Crown. Season 1, episode 4. BBC Two. 21 July 2012. DVD. Universal Studios, 2013.
Technically, I should have been following The Hollow Crown's broadcasts of Shakespeare's second tetralogy rabidly since 2012, but time has conspired to prevent me from doing so.

And, technically, I still haven't watched them. I know it's nearly heretical to say so, but I've dipped into The Hollow Crown's films and haven't been utterly compelled to shove everything else on my plate off onto the floor and devote every waking moment to the series.

But I was interested in exploring different versions of the St. Crispin's Day speech with my Shakespeare and film class, and my class and I both enjoy it when we're all looking at a film for the first or second time (rather than looking at a film I've seen two dozen times and they've never seen), so I determined to try a few I hadn't yet seen, and The Hollow Crown's Henry V was on the list.

Hiddleston's approach is understated but still very effective. His crowd is small, and the camera is nearly on a level with everyone (instead of privileging Henry, as in most versions). And the scene very nearly have no soundtrack—until we reach "band of brothers," at which point they just can't help themselves. Take a look:


My students were very adept at finding all sorts of interesting things to say about the clip, and it has convinced me that I should find the time to watch the films in their entirety.
Links: The Episode at IMDB.