The Play Shakespeare in Harlem—Based on Poems by Langston Hughes 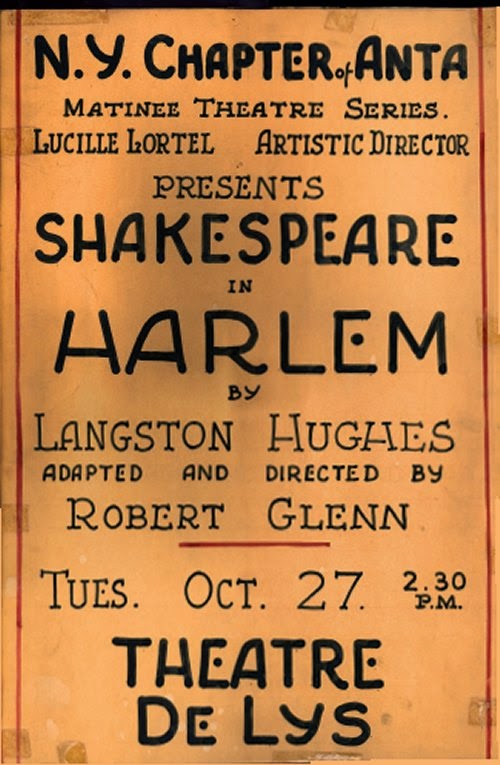 Let me preface the rest of the post with this statement: Librarians are Amazing.

A careful reader of Bardfilm asked me about a statement in James Shapiro's volume Shakespeare in America (for which, q.v.). The introduction to the poem "Shakespeare in Harlem" concludes by saying,


A short, lyrical play by Hughes, also called "Shakespeare in Harlem," and which also riffs on As You Like It (taking as its frame the famous speech about the Seven Ages of Man but turning it into "a man's blues have seven ages") was staged in New York in 1960. (450)

Having run into dead ends in my own research (which wasn't actually all that shabby), I turned the question over to a reference librarian at my institution. She was able to find out the following information:

Shakespeare in Harlem was a play composed by a white playwright named Robert Glenn. According to Gospel Plays, Operas, and Later Dramatic Works, volume six of The Collected Works of Langston Hughes,


Hughes wrote Mister Jazz as an opener for the Broadway production of Shakespeare in Harlem, a one-act play derived from his poetry by a young white playwright, Robert Glenn. So successful was the August 1959 production of Shakespeare in Harlem in Lucille Lortel's White Barn Theater in Westport, Connecticut, that she brought it to her Theatre de Lys in Greenwich village for one night, October 27, 1959, pairing it with Hughes's Soul Gone Home. The Broadway production, at the 41st Street Theater, was paired with a dramatic rendition of James Weldon Johnson's God's Trombones. It lasted only thirty-two performances despite good reviews. It seems that Mister Jazz has never been performed, Alvin Hayley expressed interest in it as a ballet libretto. (246)

It also interestingly notes that, "On February 3, 1977, the AMAS Repertory Theatre presented the Off Off Broadway production Come Laugh and Cry with Langston Hughes, a new version of Shakespeare in Harlem which was adapted by Rosetta LeNoire and Clyde Williams" (401).

The 13 February 1960 edition of the Daytona Beach Morning Journal has this review: 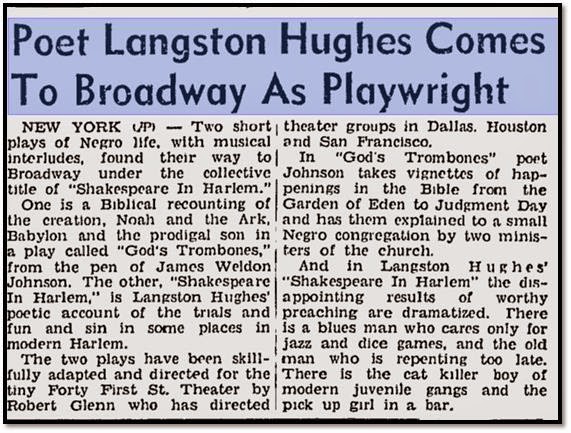 There's a longer review by Brooks Atkinson in the New York Times from 10 February 1960. It includes these paragraphs:


An old man, sitting on a curbstone, ponders the problem of migration to Harlem from the South and the West Indies. A jovial madam recalls the series of worldly misfortunes that have driven her out of respectable businesses. A college student wonders if he can communicate his private hopes and thoughts to a white instructor. A Harlem man whose girlfriend has left him tries to convince himself that he is happier alone.

There are four or five other vignettes in rhyme--all of them small, none of them dazzling. Mr. Hughes seems to be sitting alone, reflecting on the heedless life that pours through the streets, bars and tenements around him. If he were a bitter man, the reflections would be full of passion.

A more detailed account of the play's origin can be found in Lucille Lortel: The Queen of Off-Broadway (New York, Limelight Editions, 2004):


In Dallas [Glenn] had directed the Little Theatre, one of the first African-American theatre groups there. "I couldn't find scripts for them," he recounted, "so I put some of Langston Hughes' poetry, some music and called it Shakespeare in Harlem," a title borrowed from one of Hughes' books of poetry. (156)

The description continues on page 157: 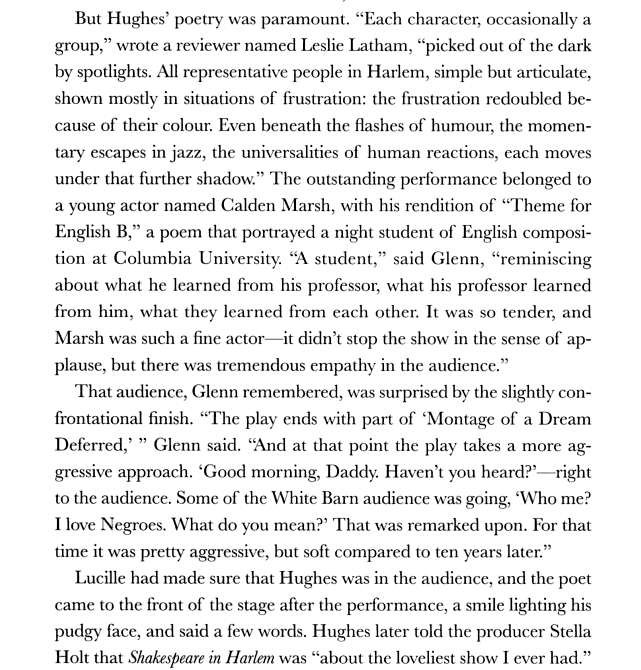 From this we learn that the play was made up of more than poems from Hughes' 1942 volume Shakespeare in Harlem. It contains "Theme from English B," which appeared in the 1951 volume Montage of a Dream Deferred. It also contains (as is stated outright) an ending from that volume. The ending comes from the poem "Good Morning" (pages 426-27 of The Collected Poems of Langston Hughes): 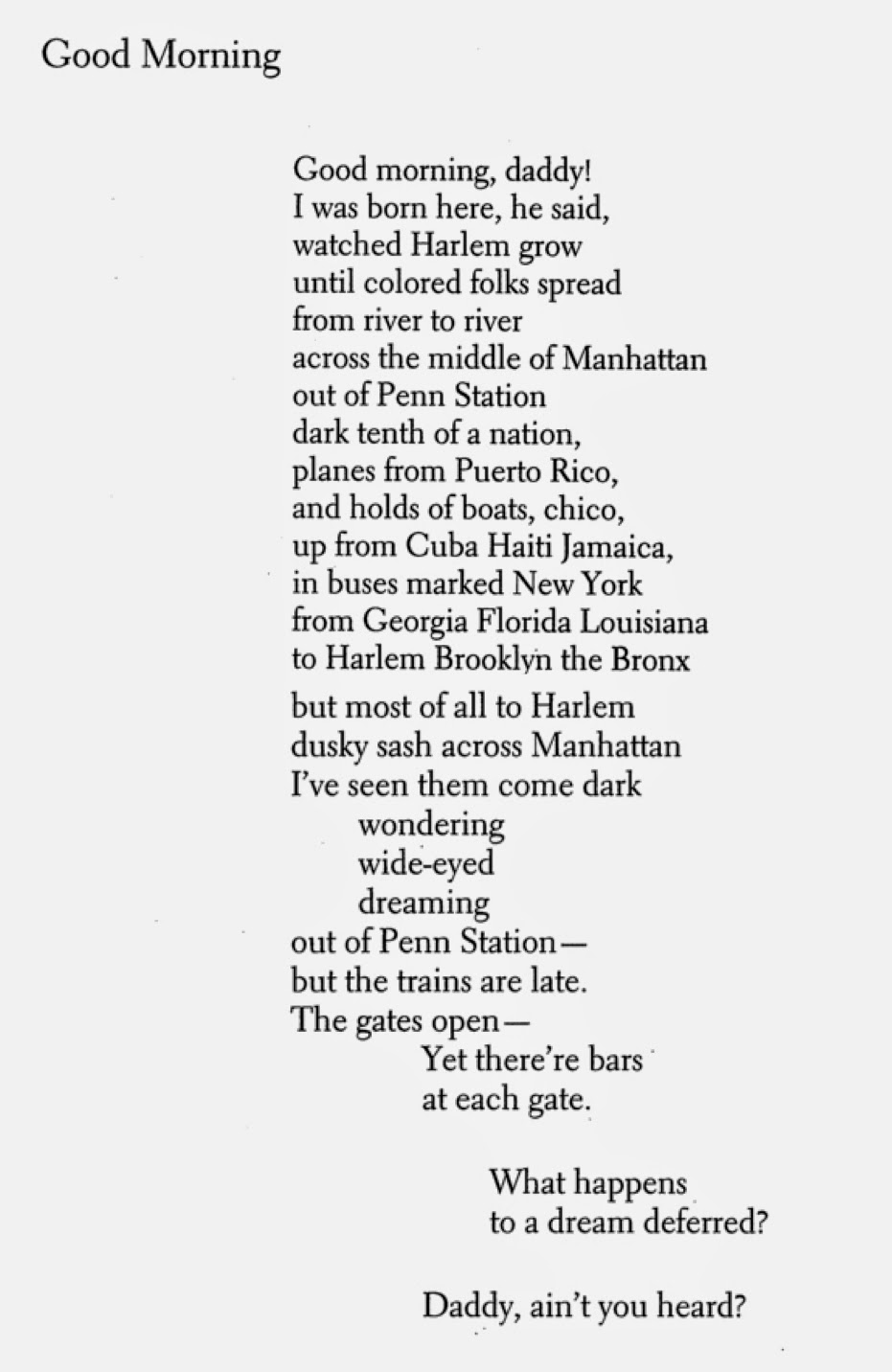 All of that is completely fascinating. But where's the script?

The New York Public Library wrote back to say that


. . . folder 17, in box 26 does contain an excerpt which was performed at the 20th Anniversary Gala, ANTA Matinee Series, Theatre de Lys (New York, N.Y.) [held on 1 December 1975]. The format appears to be poetry set to characters in play form. Although we have programs and clippings from productions of the piece, that is the only script to be found.

From here, it's a matter of going to the NYPL and asking for Box 26, Folder 17 of the Lortel Papers in the Billy Rose Theatre Division. A list of its contents can be found right here. If any enterprising reader in the New York City area is up to the investigation, I'd welcome a report! Otherwise, it looks like I could obtain a copy of the material for $25 to $35—but I'm out of funds for the year. When the new fiscal year starts (on August 1), I will be able to resume the search and find out, as best I can, the specific contents of Langston Hughes' poetry as adapted by Robert Glenn into Shakespeare in Harlem.

Thanks very much to the Berntsen Library at the University of Northwestern—St. Paul and to one reference librarian in particular. If it weren't for her good, hard work, I wouldn't know any of this.

Update: The Library also has a budget for inter-library loan items like this one! Thanks again, Berntsen Library! Readers, I'll keep you informed about the research progress.

Click below to purchase The Collected Poems of Langston Hughes from amazon.com
(and to support Bardfilm as you do so).

Thank you for your research. I am pasting this reference into my FB page called Shakespeare in the Multicultural Classroom.