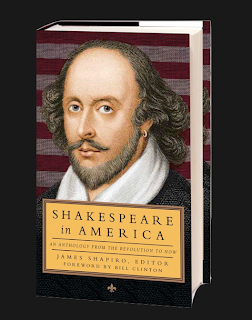 Shakespeare in America: An Anthlogy from the Revolution to Now. Ed. James Shapiro. New York: Library of America, 2013.
Despite the paucity of posts, I've not been entirely idle this summer. I haven't seen too many films, but I've read a fair number of books, particularly in preparation for an American literature course I'll be teaching in the spring.

[Note: When they told me I'd be teaching the course, I said, "American Authors? This is gonna be the best day of my life." But I digress.]

Shakespeare in America is an anthology of Shakespeare-related material edited by the great author and Shakespeare scholar James Shapiro. There's a wealth of magnificent material here (along with some genuinely awful offerings). Reviews of film and stage productions elbow poems commenting on Shakespeare plays and the man himself. Pieces by Nathaniel Hawthorn and Herman Melville bump up against vaudeville burlesques and philosophical works.

I wish that the book provided more supplementary material—particularly for the musical pieces. There are occasional vague links to related material (e.g., a section on Orson Welles' "Voodoo" Macbeth helpfully points interested readers to the URL youtube.com), but they could be more numerous and more precise (e.g. pointing readers to http://bardfilm.blogspot.com/2010/10/rare-clip-of-orson-welles-voodoo.html for a clip from the Welles' production).

All the same, this is a book to add to your library—it will provide hours of interest and enjoyment.