The Illustrations of Wallace Tripp and my Earliest Memories of Shakespeare 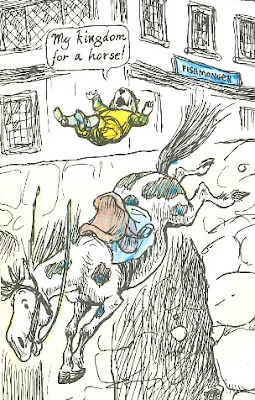 Either way, it's a difficult question to answer. I have a few stories about youthful experiences with a book, a stage production, or a film, but none of them is a clear first.

The image above, a detail from the image below, may come closest to being the first place I remember encountering Shakespeare. When I was young, I used to pour over two books by the unbelievably amazing illustrator Wallace Tripp. In them, he compiled nursery rhymes, famous sayings, and pieces of poetry and provided meticulous and marvelous illustrations for them. His illustrations are dense, funny, thoughtful, and detailed, and they reward repeated study—much like the works of William Shakespeare!

The image below (from A Great Big Ugly Man Came up and Tied his Horse to Me) is a giant two-page spread of an elephant in Renaissance dress causing London Bridge to crumble. To the far left, a horse is jumping clear of the destruction; its rider, having been thrown from the saddle, is falling after it, crying "My kingdom for a horse!" I don't know quite when I learned that those words came from Shakespeare, but I do recall the immense enjoyment the line gave me. 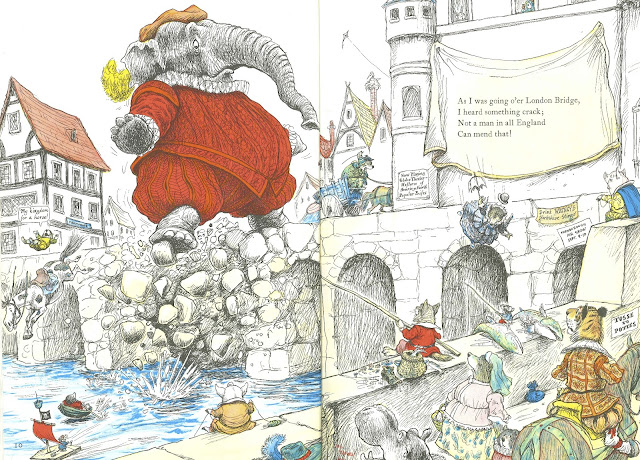 Note, too, the Fishmonger's shop behind the falling figure (is Polonius within?) and the bill reading "Now Playing Globe Theatre—Historie of Henry ye Fourth"


Tripp's details intrigued me and sparked my imagination. I'm not absolutely certain that his illustration of the proverbial "For want of a nail, the shoe was lost" is intended to depict Richard III and the Battle of Bosworth, but I connected it in my young mind with the cry of "My kingdom for a horse" from the earlier illustration. I also used to spend hours squinting at this drawing, trying to find the nail that all those soldier had missed. Note: The nail is in the image below—can you spot it? 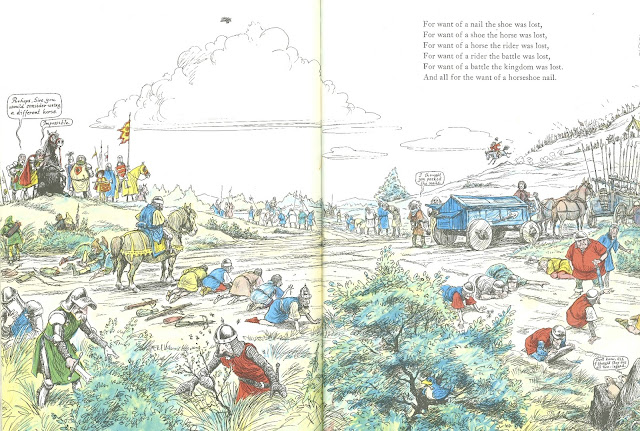 From A Great Big Ugly Man Came up and Tied his Horse to Me.

Tripp's Granfa' Grig had a Pig has only one quote from Shakespeare that I could find, but it's a very useful one to have in your word-hoard:

A Snide Side Remark from King Lear.

I wasn't aware of Tripp's Marguerite, Go Wash Your Feet until many years after it was published, but I wish I had been. In it, the Shakespeare is more direct and more abundant (and the side remarks by other characters more humorous): 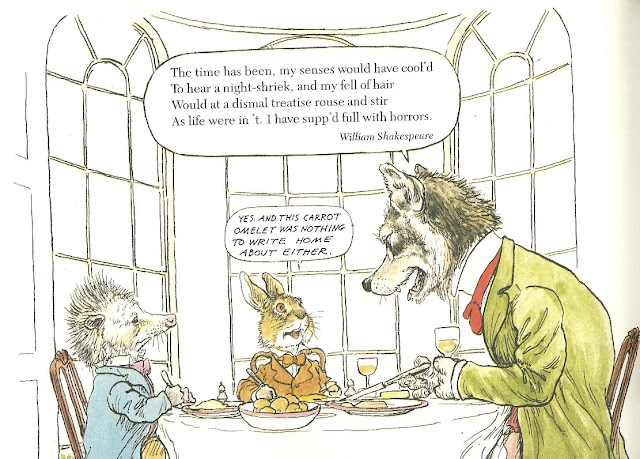 A Quote from Macbeth and a Complaint about a Carrot Omelet. 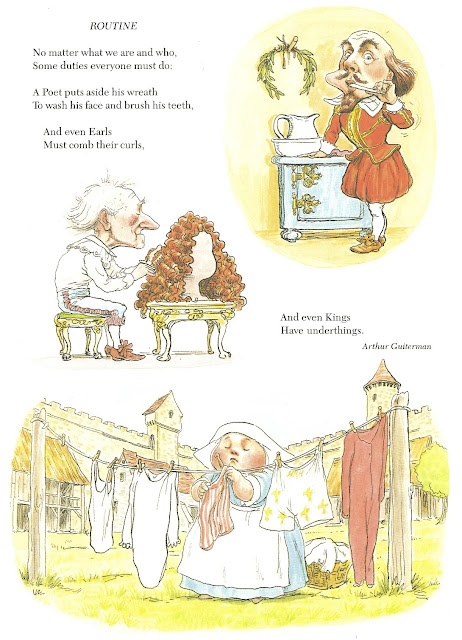 William Shakespeare, the Ordinary Human Being 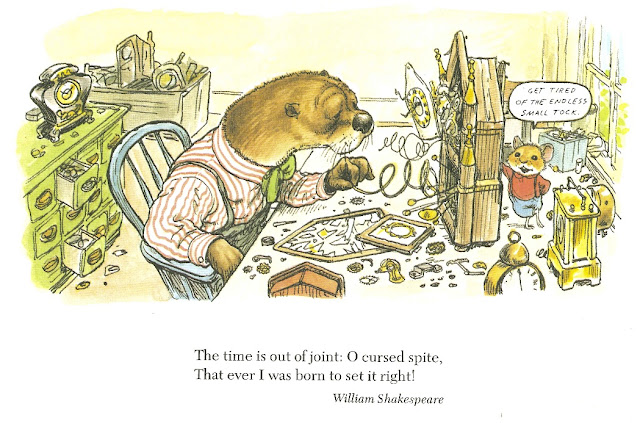 A Quote from Hamlet as a Horologist's Lament 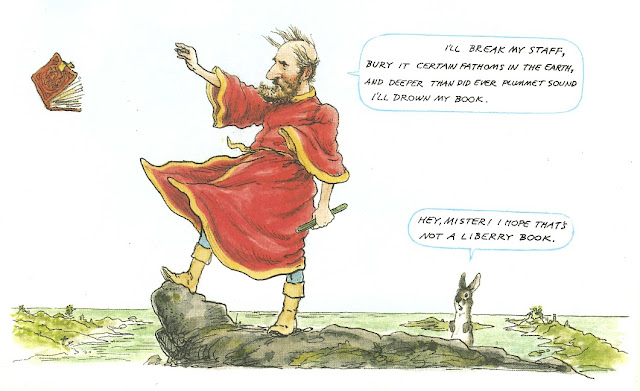 And that is the last image in Marguerite, Go Wash Your Feet. I gather that Wallace Tripp has retired from illustrating. I wish to thank him for the hours, days, and years of pleasure his work has given the world. Thank you, Wallace Tripp!

A great big ugly horse etc. is a family favourite here where playing with playing with words is a serious sport.

Thanks, AHAviews! I'm so glad. Sharing Tripp is a pleasure, but it's an even greater pleasure to meet someone who knows his work already.

I read "A Great big Ugly man came up and tied his horse to me, " 30 years ago to my kids and they still remember the rhymes today. Loved the book and have started my own series, cartoons and prose, along the same nonsensical avenue.

Wally, I would like some critique of my work. I have drawn 17 pages, thus far.

I absolutely love the drawing and writing of your style.

Thanks, Anonymous, for your comments. Yes, the work of Tripp is exceptionally memorable.

Take care, and good luck with your own nonsensical work!