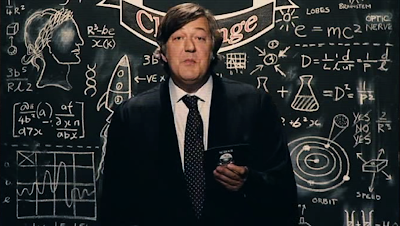 Ronald Searle invented St. Trinian's in the 1940s in a series of comics (two are included below). It was—and is—a prep. school filled with the worst possible students and teachers. Therein lies the fun.

If you ever decide to watch this film, give it twenty minutes before making a decision about whether to give up or not—it takes about that long for the humor to catch on. If it's caught on by then, you'll likely enjoy the rest of the film.

In this film, the girls have to win the School Challenge Quiz Show at all costs. Naturally, they cheat unrelentingly. This clip contains the only direct reference to Shakespeare in the film—it's late in the clip, so wait for it (I felt the need to set the scene by showing both the first and second rounds of play).

And there you have it. Stephen Fry does add a certain je ne sais quois to the performance—but it's the Shakespeare that really does the trick.

I gather that a newer film—St. Trinian's II: The Legend of Fritton's Gold—has even more Shakespeare. But the film hasn't yet been released to markets in the United States. Further bulletins as events warrant!

"Come along, prefects. Playtime over."
Links: The Film at IMDB.

Click below to purchase the film or the book on which it was based from amazon.com
(and to support Bardfilm as you do so).