Shakespeare in the 1950s: The Guthrie Theatre's Production of Two Gentlemen of Verona 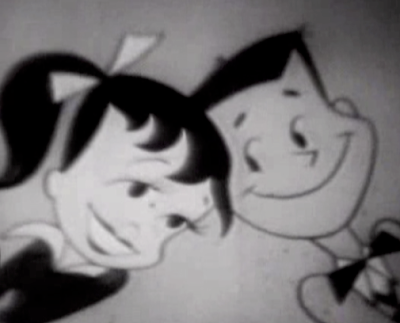 Two Gentlemen of Verona. Dir. Joe Dowling. Perf. Sasha Andreev, Sam Bardwell, Michael Booth, Sun Mee Chomet, Laura Esping, Nathaniel Fuller, Jonas Goslow, Hugh Kennedy, Jim Lichtscheidl, Valeri Mudek, Kris L. Nelson, Lee Mark Nelson, Isabell Monk O'Connor, Randy Reyes, John Skelley, and Wyatt Jensen. Guthrie Theatre Company. Minneapolis. 24 January—29 March 2009.The Guthrie’s Two Gentlemen of Verona was, I have to admit, slightly disappointing. I’m loathe to say so, however, because it was a good, solid production at a great, great theatre and because it was marvelously entertaining. Just because it didn’t measure up to the Midsummer Night’s Dream Joe Dowling directed last season (for which, q.v.) is no reason to discount it out-of-hand! But it was a bit disappointing, and that’s one reason (the other is that I felt compelled to give a Pepsodent commercial from the 1950s a Shakespearean twist—see below) it’s taken so long to write a review of it. I felt bad—I felt too critical even in expressing a mild disappointment.

This is especially true because there were some deeply significant and vitally interesting parts of the production. For example, the play is set on a TV sound stage in 1955. Throughout the performance, two huge, bulky TV cameras (one moving about at ground level in front of the stage and one on a crane upstage right) film and broadcast the performance to two giant 1950s-TV-shaped screens. The “broadcast” (really, I suppose, closed-circuit) images were black and white, occasionally tending toward that washed-out look common to early television broadcasts.

One of the commercials shown before the production—
but given a Shakespearean twist for Bardfilm.
It's also possibly the silliest stuff that ever I produced or you heard.
That staging, as odd as it may sound, was extremely effective and fit with some of the concerns of the play exceptionally well. The play frequently uses images of blindness (including references to Cupid, the blind god of love), shadows, and “unseeing eyes,” and these partially-obscured literal images underscored the figurative images in the text of the play.

The camera work was at its most effective when a character would turn his back on the audience to address the eye of the upstage right camera. For example, Proteus (before he leaves Verona) offers a direct address to that camera. Meanwhile, his father approaches him from behind. We see Proteus’ back and his father walking toward him on stage; we also see Proteus’ face and his father approaching him over his shoulder. All in all, it’s a very nicely layered effect.

The ’50s setting was also effective while we were arriving. We entered the theatre to be greeted with images from advertisements from the 1950s on the screens and the audio from ads for Kent Cigarettes, Paladin, Pepsodent (see above), and TV Dinners on the speakers.

This ’50s feel continued as a frame for the play itself began. The stage manager came on to welcome us, the live studio audience, to this broadcast of Shakespeare’s Two Gentlemen of Verona, but not before the cast milled about on the stage, chattering and complaining. In this pre-air gabble, Lance asks who wrote the script. Someone says, “William Shakespeare, of course.” “Is he on set?” he inquires after hearing the name.

The stage manager is a fairly-constant presence, motioning to actors to enter or to prepare for their cues and chatting with the upstage-right camera man; for the most part, this isn’t too distracting. However, early in the play, there was too much noise coming from this ostensible backstage—it distracted from rather than enhancing the on-stage performance.

More distracting still were the “Guthrie asides”—extra-textual statements common to Guthrie productions of Shakespeare that are intended to make the text more palatable to a modern audience (I suppose) but which end up seeming quite immature—more like a high school production than a professional theatre. I’m sorry, but it’s true. As readers of Bardfilm know, I’m not ultra-conservative in my demands of productions of Shakespeare. I find many of the BBC film versions, for example, to be quite dull because they stick too closely to the script. But there were far too many interjections (for example, Lance and Speed frequently turn to each other and say “Wha?” when the language gets too obscure). Lance also frequently says things that give the general impression of “Don’t blame me if it’s not funny—it’s Shakespeare’s fault, not mine.” Once or twice might have been fine; after that, it becomes tedious.
In general, though, Lance was pretty good.  Jim Lichtscheidl played him as a cross between Ed Norton and Rodney Dangerfield. For a early-television-era setting, it was a good choice.

When Julia and Lucetta have their conversation in I.ii about suitors, it seems like an early, rougher version of the exchange between Portia and Nerissa on the same subject in The Merchant of Venice. The set and the setting seemed to underline that.

Another connection to that play could be found in the audience’s reaction to the exchange of the ring. When I saw The Merchant of Venice at the Guthrie, I was impressed and moved that some audience members audibly gasped when Bassanio handed over Portia's ring. One woman near me actually blurted out a hastily-quelled “No!” It was a marvelous moment, making me consider the contemporary (to Shakespeare) reaction to a moment in a play never before seen. The same thing happened (more or less) in IV.iv of this production of Two Gentlemen of Verona when Proteus gave Julia (in disguise) the ring Julia had earlier given him to give to Silvia.

Early innocence giving way to less-naïve maturity may also be indicated in the setting and the set. Early in the production, Proteus sips Coca-Cola through a short straw—looking very much like a character out of the Archie comic books—while Valentine has martinis. Later, almost immediately after Proteus meets Sylvia, he switches to the hard stuff.

Finally, I offer a miscellany of other things about the production, all the while encouraging you to go see it (especially with the special Bardfilm discount, for which, q.v.).

Silvia:
How tall was she?

Julia:
About my stature; for at Pentecost,
When all our pageants of delight were play'd,
Our youth got me to play the woman's part,
And I was trimm'd in Madam Julia's gown,
Which served me as fit, by all men's judgments,
As if the garment had been made for me:
Therefore I know she is about my height.
And at that time I made her weep agood,
For I did play a lamentable part. (IV.iv.155-64)