First and Second Impressions on the GRSF's Taming 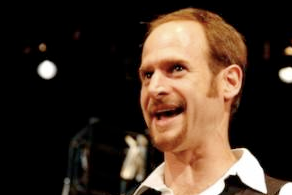 The Great River Shakespeare Festival does Shakespeare well.  Their productions are personal, intimate, clever, and thought-provoking without being weird or badly-acted.
They also do enough Shakespeare—I only wish I had also been able to see their Merchant of Venice and the Pericles put on by the Apprentice Project. Next year, I intend to see everything they offer (and I'd recommend that you do the same).
I also regret not being able to see the show earlier in the run.  The show has now closed, so I'm unable to promote the 2008 season with the enthusiasm it deserves (though I can write about it enthusiastically and promote the 2009 season with great expectations).

The production gave us a Shrew of the broadest farce. The set contained metal-framed pillars that the actors could climb to observe the action—and also to play any one of a huge number of percussion instruments. Slide whistles, drums, and clackers accompanied the slapstick action.

I think it was a good choice for this play. The audience was persuaded from the start that nothing of any real consequence was going to take place in the world of the play. Thus, Katherine's striking Petruchio (and her re-striking him on his line "I'll swear I'll cuff you if you strike again," against which he had no strong response) was accompanied with sound effects. The effect of the effects was to lessen the repercussions of the physical violence for which the play calls.

The characters, after all, are from the Commedia delle'arte.  But, in Shakespeare, even stock characters like the Pantaloon seldom remain two-dimensional.  This production gave us that, too.
Katherine, who was not very often very shrewish, effectively demonstrated that the shrew in her was (mostly) a public persona.
Petruchio, who seemed to find his own actions as distasteful as a member of a modern audience might, was grasping at straws and playing it by ear through most of the play.  It was an intriguing interpretation.
In a future post, I'd like to comment more fully on these very effective moments in the play:
In the meantime, set aside June and July of 2009 so you won't miss a moment of the glory that is The Great River Shakespeare Festival!
Links: The Festival's Cool Website.
Copyright 2008-2039 by kj at 1:55 PM