A Little Shakespeare in Flowers for Algernon

Keyes, Daniel. Flowers for Algernon. New York: Harcourt Brace, 1897.The short story "Flowers for Algernon" was a memorable part of the general literature curriculum when I was growing up. Only recently did I learn that there was a novel telling the same story.
The story is about a mouse (Algernon) who has undergone an operation and has gained "super-genius" status. The same operation has been performed on our protagonist, whose intelligence had been below average.
Before you risk any spoilers, you can pause to read the short story.
Back?  All right.
The story, then, is about how the mouse starts to lose his intelligence just when the man is reaching the peak of his and what the man thinks when he realizes his intelligence is ephemeral.
Somewhere in the middle of the novel, Charlie Gordon (the man) is exposed to college life, and he's fascinated by all the things people have to say. The section below shows the direction the conversation goes when Shakespeare comes into the picture: 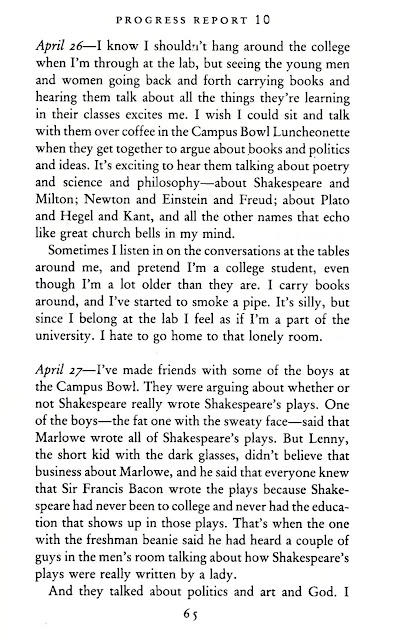 The rest of the book is silent on what Charlie thinks about the argument, but it's interesting to note that this is one issue that fuels his intellectual hunger.
Click below to purchase the book from amazon.com
(and to support Bardfilm as you do so).