Book Note: Death at the Dolphin

Marsh, Ngaio. Death at the Dolphin. Glasgow: William Collins Sons, 1967. Also available as Killer Dolphin. New York: Amereon, 1983.
Ngaio Marsh is one of the great mystery authors of all time. She's mostly quite a bit gorier than Agatha Christie, but her characters are just as—if not more—deeply developed.

Don't let the cover image to the right (the image of the brass dolphin appearing to weep blood) put you off—the contents of this novel are genuinely fascinating in any age, even if the cover was designed in the late ’60s.

And, since you're reading about this novel here, you realize that there are connections to Shakespeare in it.

The plot involves an actor named Peregrine Jay who, though a set of circumstances that I will not spoil for you, ends up being involved in the renovation and re-opening of a London theatre that had been damaged during the Blitz. The Dolphin (that's the name of the theatre) is to open with Jay's new play: The Glove.

I will give away why the play has that title (pages 28-29)—it's one of the most interesting parts of the novel (click on the image to enlarge it and to read it): 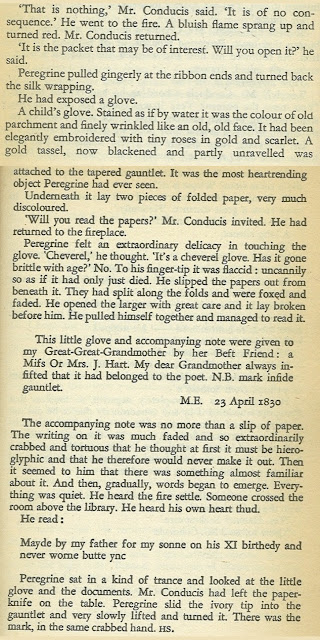 “Mayde by my father for my sonne on his XI birthedy and never worne butte ync” (29).

If that doesn't give you something of a frisson, I'm not sure you can call yourself a Shakespeare fan.

“HS,” as you may have divined, stands for “Hamnet Shakespeare.” And all the pieces start to fall into place.

The play Jay writes after seeing the glove sounds a bit maudlin—it contemplates the circumstances under which such a glove might have been made—but Marsh is astute enough to avoid giving us too much of the play itself within her book. Instead, she sticks to the lives of the actors—and the mystery that envelops them.

I'm done with spoilers—I'll leave it to you to read the book and to find out if this is a forgery like those of William-Henry Ireland (for which, q.v.) or if it's genuine.

And do read the novel. It is just stupendous.