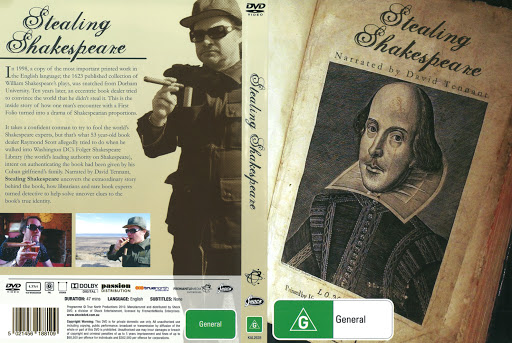 Stealing Shakespeare. Dir. Christian Hills. Perf. David Tennant and Raymond Scott. 2010. DVD. Shock Entertainment, 2010.A fascinating documentary about the theft and prospective sale of a First Folio, Stealing Shakespeare tells the story of Raymond Scott and his haphazard, poorly-planned attempt to have a First Folio authenticated so that he could sell it.
The Folio was stolen from Durham University in 1998.  Ten years lager (2008, for those of you keeping score), Raymond Scott showed up at the Folger Shakespeare Library with a First Folio he claimed to have discovered in Cuba. He asked them to declare its authenticity so that he could then go about selling it.
It was a First Folio, all right. It was not a fake or a forgery. But, although it had been damaged since it was last seen, it was the purloined Folio from Durham.
One of the best things about the documentary is that they managed to get the story straight from Scott. I'll give you a sample in a moment, but I'll remark that Raymond Scott's story was as full of holes as a sieve. He wasn't in Cuba when he said he was, he wasn't the millionaire playboy he pretended to be, and the volume he had in his possession wasn't a previously-uncatalogued First Folio.
In the clip below, you'll get some of Scott's story, some of the FBI and the CID's discoveries, and (this is the really magnificent part) some of the fascinating First Folio forensics that were used to determine that the copy was, indeed, the one stolen from Durham in 1998. Take a look:
Scott was convicted of possessing a stolen object (though not of the actual theft) and sentenced to eight years in prison.
Different sources say different things about who the actual thief was. Some (including the documentary) say that we may never know who stole the First Folio in the first place; others claim that Scott admitted the theft even though he wasn't convicted of it.
The scholarship that went into proving that the Folio in question was from Durham is delightful. And its restoration to its rightful home is a triumph. But the story has a sad conclusion.  After serving two years of his eight-year sentence, Scott committed suicide.
This DVD is in PAL format, which makes it a little harder to view. But it tells the story remarkably well—with David Tennant at his most fully Scottish narrating—and it's well worth the effort.
For Further Fascinating Reading on this Topic:
West, Anthony James. “Proving the Identity of the Stolen Durham University First Folio.” The Library: The Transactions of the Bibliographical Society 14, no. 4 (December 2013): 428-40.
———. “Correcting the First Folio’s Table of Contents.” Papers of the Bibliographical Society of America 108, no. 2 (June 2014): 238-42.Links: The Film at IMDB.