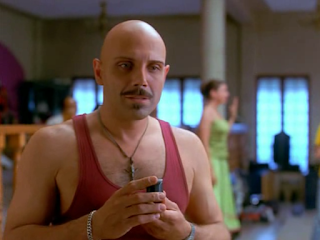 This film sets Othello in small-town Mexico among characters who focus their attentions on their skills at Huapango, a kind of Mexican folk dance.  During the National Festival of Huapango, the Iago analogue, jealous at being slighted by the Desdemona analogue, plots his revenge.  One of the most interesting features of this film is its treatment of the Othello analogue, who is injured in a rodeo early in the film and spends the rest of the film recovering in bed.

One other point of interest is where the film sets its conflict. I've talked to a scholar who has written about the film (and about other Shakespeare films from Mexico), and he said that there was not a racial component to the rivalry between the Iago analogue and the Othello analogue. Santiago (our Iago) is of a different social class than Otilio (our Othello), but not of a different ethnicity.

The clip below shows the opening of the film. Watch it to see what other alterations to the Othello narrative the derivative makes.

Note: As always, I am alerting readers / viewers to some unsavory language in the clip below.

I find that to be absolutely fascinating. The Iago analogue isn't motivated because someone else was promoted before he was—much less that he suspects the Othello analogue of sleeping with his wife. He is the person who is initially jealous, and, on the point of declaring his love for (and proposing to) our Desdemona analogue, he feels humiliated and rejected.
Links: The Film at IMDB.

Click here to purchase the film from a place called DVD Planet Store.

Note that I haven't used this vendor before and have no idea how reliable they are, but the DVD isn't available on amazon.com.
Copyright 2008-2039 by kj at 2:25 PM