A Masterful Comedy of Errors at the Great River Shakespeare Festival 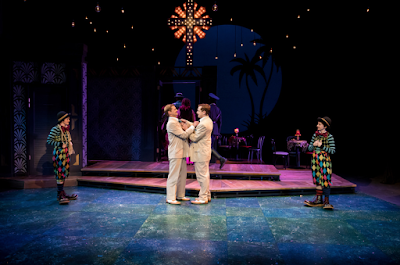 The setting is something of a mix of 1920s flapper parties, Chicago-style underworld, and vaudeville. Before the show, we were treated to a piano, string bass, and vocal trio who were singing sultry songs that seemed to have the theme of magic: "Witchcraft," "I Put a Spell on you," "(You Give me) Fever"—perhaps included for its references to Romeo and Juliet ("Thou givest me fever . . . Fever, yea, I burn, forsooth"), and others.

The characters were straight out of the commedia delle'arte tradition. The two Dromios are prefect clowns, with ridiculous outfits—complete with enormous shoes. Their clowning was perfectly timed and impressively physical. Their confusion at, wonder about, and childlike admiration of the chaos unfolding around them was hilarious, and they worked very well with their respective Antipholuses (Antipholii?). The speech about the kitchen wench Nell was particularly stunning in that regard. Tarah Gerson as Dromio of Syracuse delivered the line "She is spherical" with a kind of overwhelmed awe that brought the image of the off-stage Nell before us all and made her a figure of majesty and amazement.

We also have the henpecked husband, the shrewish wife, the lovelorn sister all filling their places in the play—which doesn't mean they stay there. Shakespeare provides depth and roundedness even to characters that might otherwise be merely stock characters, and the actors play the roles with a healthy sense of that three-dimentionality.

And I'm off to see what they're going to do with Richard III . . .
Links: The Great River Shakespeare Festival. An album of photos from the show. 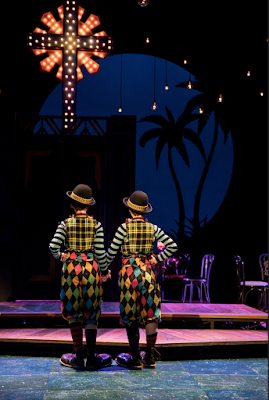