Shakespeare in Good Will Hunting 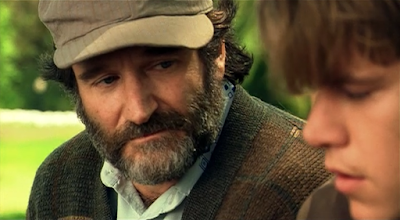 And one of the best movies featuring Boston accents in Good Will Hunting.

But did you notice the Shakespeare-with-a-Boston-accent in Good Will Hunting?

About a third of the way though the film, the Robin Williams character talks to the Matt Damon character and argues that all the book learning in the world won't make up for experience:


I ask you about war, you'd probably throw Shakespeare at me, right? "Once more into the breach, dear friends." But you've never been near one. You've never held your best friend's head in your lap, and watched him gasp his last breath looking to you for help. I ask you about love, you'd probably quote me a sonnet. But you've never looked at a woman and been totally vulnerable—known someone that could level you with her eyes.

It's a fabulous scene, and I include it below. N.B.: The language in the clip is, like the film, rated R.

There's something quite marvelous about that. And I think I'm ready to acknowledge that Shakespeare doesn't equate to experience. But I do think Shakespeare helps us to understand the experiences that we have had and imaginatively to experience those we haven't. Yes, the Chorus of Henry V asks us to piece out the play's imperfections with our thoughts and to "Think, when we talk of horses, that you see them / Printing their proud hoofs i' th' receiving earth" (Pro.26-27), but Shakespeare's genius lies it making it very easy for us to see the horses that aren't there—to know something of the experience of war—to find an articulation of the love we know we have.

Just like Good Will Hunting enables us to know something of the experience of losing a spouse to cancer or what it's like to be an orphan growing up in Boston.

Any Dickens fans out there ready to defend Oliver Twist on similar grounds?
Links: The Film at IMDB.

Barto of the Oratory said...

The Robin Williams character is a therapist who is aiming to help the Matt Damon character to see that he uses his intellectual life in order to avoid the emotional pain of the trauma of his childhood.

Hamlet's journey was, perhaps, from a man who was too much living in his head to a man who eventually became more "down to earth," or, at least, achieved a more healthy balance between living in the "heavens" of the mind, ideas, words, poetry, theater, and philosophy, and living on the "earth" of brute force, violence, treachery, sexual attraction, etc.

Plato said that each person's psyche has 3 parts: Appetitive (pursing bodily pleasures), Hot-Blooded (passionately desiring to avenge injustices and dishonors), and the Philosopher (seeking in an dispassionate way to enact the Good, the True, and the Beautiful).

Shakespeare himself seems to have been very aware of the fakery & shallowness of much of what passes as literature, theater, philosophy, & knowledge. "Hamlet" is full of this. Hamlet talks about this in his speech that includes "What's Hecuba to him, or he to Hecuba?" and in “Seems, madam? Nay it is; I know not 'seems.”

According to Harold C. Goddard, in his book The Meaning of Shakespeare, Shakespeare himself was mightily tempted in the direction of living too much in his head, i.e., being an intellectual of the shallow, showy, money-grubbing, fame-seeking type.

In Goddard's telling, the way of the Poet is something rare & unique. The Poet, via imagination, integrates head and heart, masculine and feminine, life and death, heaven and earth, body and mind, sex and love, and so on.

In Goddard's telling, it is the Poets who are the saviors of the world, & who shall ultimately stop the recurring Hitlers, Stalins, Richard IIIs, Henry Vs, Shylocks, Edmunds, Conquistadors, Torquemadas, and types like Neil Perry’s father (“Dead Poet’s Society”).

Goddard claims that the whole of Shakespeare is summarized in these lines from Sonnet 65:

“How with this rage shall beauty hold a plea, whose action is no stronger than a flower?”

In Goddard’s thinking, Hamlet’s famous delaying is not due to some tragic flaw within Hamlet, but in fact is due to Poet within Hamlet that is struggling against the way of aggression, domination-seeking, and revenge.

Goddard claims that Prince Hamlet was struggling to resist the “force of the fathers” as represented by the ghost of his father, King Hamlet.

In Goddard’s view, the deepest reason for Hamlet’s staging the Mousetrap play was to move Claudius to contrition, repentance, & confession, thereby solving the crisis in a peaceful, unbloody, nonviolent way. And, says Goddard, this was almost accomplished, but Hamlet himself fell back under the spell of the “force of the fathers” and prevented this peaceful outcome.

The tragedy of Hamlet, says Goddard, is precisely that Hamlet did not remain on the path of Peace and Poetry, but went down the ancient, traditional road of Force and War.

Hamlet surely knew that Claudius’ invitation to a friendly duel with Laertes was some sort of trap or treachery, but he assented to it nevertheless, and thus went unreservedly into matrix of violence as the final “consummation devoutly to be wish'd.”