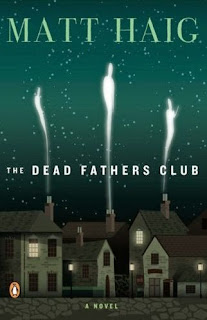 Haig, Matt. The Dead Fathers Club. New York: Penguin, 2006.
I finished reading this a little to late for it to form part of the discussion of modern versions of Hamlet in my Modern Shakespearean Fiction class, but it may make its way into future versions of the course—as an option, I think, rather than as a course text for everyone.

The protagonist, Philip, is eleven years old—which is on the young side for derivative versions of the Danish Prince—and that might lead some readers to think that this is young adult fiction. Partly because of the extent and kind of profanity in the book, I would not classify it as such. The novel also grapples intriguingly with issues and ideas of a more advanced kind—though all in the voice of an eleven-year-old boy.

The voice struck me most profoundly. It's well-crafted, captures the tone of an eleven-year-old boy, and has great interest in itself. Here's the opening of the book—in a chapter called "The First Time I Saw Dad After He Died":


I walked down the hall and pushed the door and went into the smoke and all the voices went quiet like I was the ghost.

Carla the Barmaid was wearing her hoop earrings and her tired eyes. She was pouring a pint and she smiled at me and she was going to say something but the beer spilt over the top.

Uncle Alen who is Dads brother was there wearing his suit that was tight with his neck pouring over like the beer over the glass. His big hands still had the black on them from mending cars at the Garage. They were over Mums hands and Mums head was low like it was sad and Uncle Alans head kept going down and he lifted Mums head up with his eyes. He kept talking to Mum and he looked at me for a second and he saw me but he didnt say anything. He just looked back at Mum and kept pouring his words that made her forget about Dad. (1)

Perhaps it's because I'm currently re-reading The Sound and the Fury, but I was impressed by the creation of a voice that can relate everything it sees but lacks the maturity necessary to comprehend or to interpret it.

I also appreciated how the narrative follows Hamlet's—but only to a certain extent. It doesn't make itself into an obvious Hamlet derivative, but it's filled with moments that call our attention to the play. Here are some of my favorites:


There are some very intriguing alterations to the plot, but I really can't go into them without causing major spoilers. With an appropriate qualification about the obscenities in mind, The Dead Fathers Club provides an interesting take on Hamlet—one that invites us to return to the play for yet another reading.