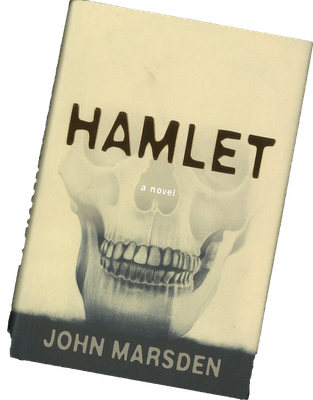 Marsden, John. Hamlet: A Novel. Somerville: Candlewick, 2008.
I've been very torn about this book.  For some, this is their entrée into Hamlet (and, thereby, into Shakespeare).  But I can't help giving it a new title in my mind:  Hamlet:  The Novelization.

Essentially, that's what this book is.  The plot of Hamlet is retold as a novel.  That's all.  Here's the beginning of Chapter Five as an example:


The ghost growled the last word. Hamlet thought it the loudest sound he had ever heard.

In agitation the man began to walk away from the lions, as if he did not know where he was going.

Hamlet stumbled after him. Behind him, Horatio too started to walk, and farther behind, Bernardo. The dog slunk away toward the eastern corner of the courtyard, then broke into a run, disappearing around the side of the library.  (24)

Well, that's not quite all.  There's some consideration of the interior of both Hamlet and Ophelia; that part is almost-exclusively sexual in nature.  I've selected this passage because it gives the flavor of that motif even though it's one of the mildest in the novel.  I'm fairly sure you don't want to read the more explicit ones.  Here's the beginning of Chapter Thirteen: 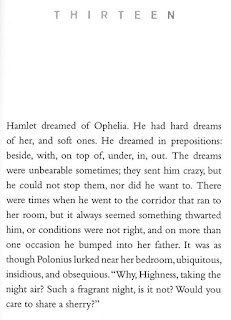 There's that (which, at least, has a cadence and alliteration in "Would you care to share a sherry?"), and then there is some strong profanity.

I found the novel on the dull side.  Yes, even the sexualized sections are flat (not to mention unprofitable).  They're also a little stale, and they make me weary.  In any case, I didn't find much of interest.  If you've read this blog, you know that I don't object to setting Shakespeare in other places, other times, other cultures, or other languages.  Indeed, I find a lot of that to be utterly fascinating.  This novel is set in a vague castle setting (which makes it odder whenever Hamlet is described as wearing jeans).  It's not vague enough to be universal nor precise enough to be significant.

There are just a few moments that are intriguing, but they're dropped pretty quickly.  During the novel's equivalent of Act I, scene ii, Hamlet responds to Claudius' articulation of death's inevitability in this way:  "Hamlet shrugged and looked at the wall opposite, at an oil painting of Joseph of Arimathea" (36).  That juxtaposition of images could be really meaningful—but it's just left hanging.  Later, the players say, ". . . we can do Romeo and Juliet if that is your wish.  It's not a bad bit of work, although a bit far-fetched" (75).  The meta-theatrical possibilities are opened there—but they are not re-addressed.

All in all, I'd advise reading Hamlet:  The Play rather than Hamlet:  A Novel[ization].  The play has everything the novelization has—and much, much more!