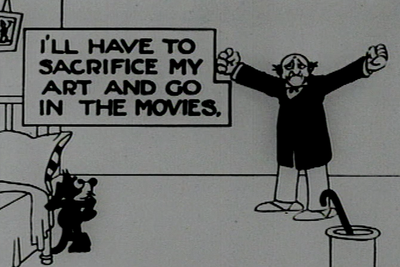 Felix in Hollywood. Dir. Otto Messmer. 1923. DVD. Sling Shot Entertainment, 1999.
Although this one was not mentioned by the article, it fits in Richard III week well under the category "No Escape from Shakespeare."

I wasn't really searching for Shakespeare when I went to the small museum kept at the top of the Foshay Tower in downtown Minneapolis (along with a marvelous observation platform), but there he was, embedded in a cartoon from 1923.

The Foshay Tower was built during the Roaring Twenties, and the museum directors decided to give their visitors something of a taste of that time in American history. Felix the Cat must have sprung to mind, and the cartoon short Felix Goes to Hollywood can be played from one of the museum's kiosks.

In the film, there's a brief parody of one of Richard's best-known lines:

Links: The Film at IMDB. The Foshay Tower at Wikipedia.