A Quick Review of the Young Adult Novel All the World's a Stage: A Novel in Five Acts 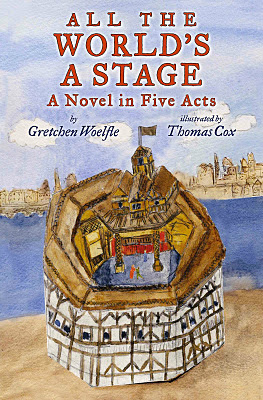 Woelfle, Gretchen. All the World's a Stage: A Novel in Five Acts. Illus Thomas Cox. New York: Holiday House, 2011.
Please allow me to throw out a quick review of a book that I read at the beginning of Christmas break.

All the World's a Stage: A Novel in Five Acts has, at its center, an imaginative re-enactment of the events described at the opening of James Shapiro's 1599: A Year in the Life of William Shakespeare. The book is geared toward younger young adults, and it tells the story of a pickpocket named Kit who is caught in the performance of his duties at the theatre at which Shakespeare's company is performing. The year is 1598, and Shakespeare's company is soon without a permanent home. Kit joins the company (after a fashion—no spoilers on that score here) and helps tear down the Theatre, move its timbers, and build the Globe Theatre with them.

Here's a quick selection from the scene where Shakespeare's company, after long arguments with the man who owns the land on which the Theatre was built (and who thinks he owns both the land and the building built on it), starts the business of tearing the Theatre down: 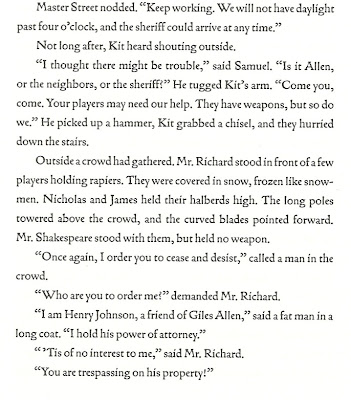 The book is well worth reading, but the best parts are in the first half. After that, the protagonist tends to suffer from enormous, indecisive angst, and that puts something of a damper on the narrative.