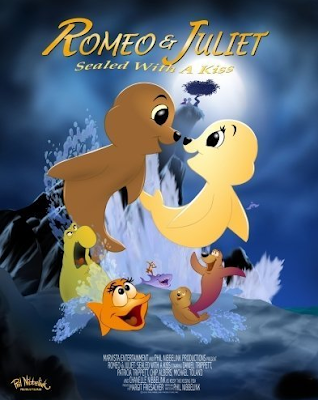 You're right, I spotted this a mile away. :)

When I did first review that movie, I was ranting and raving at some of the liberties they took (such as the dreaded Wherefore issue). But it grew on me over time really for one reason - it's a very easy introduction to the play for young kids. I would not stick a high school class in front of this one and expect them to get anything out of it - it may even do more harm than good.

But, and you can trust me on this because I've been there, a 3yr old will absorb the details like they're second nature. In this movie's version of the Capulet party, the Montagues (the brown seals) cover themselves in white sand so they can appear to be white (Capulet) seals. So my daughter at the dinner table rubs her face in parmesan cheese and announces "Look! I'm a Capulet!"

My main gripe with this is the animation quality. They took five years to animate this, and by that time, flash technology went leaps and bounds to the point where twelve-year-olds can make smoother, more colorful animation than this. One should never sit on a project for too long, especially when the "animation studio" is pure software.

Either way, I found it most tolerable. And I'm glad I'm not the only one who actually watched it.