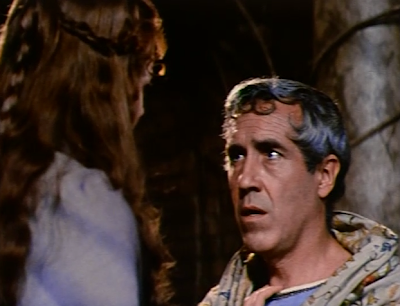 Here, for example, is a clip I've had around for a year or so. It's from the 1970 film version of Julius Caesar in which Charlton Heston played Mark Antony. I gathered it because I've seldom seen such masterful acting paired with such pitiful acting. The scene is Act II, scene 1, in which Portia pleads with Brutus to share the burdens he carries with her—so that his load may be lightened. Diana Rigg plays her role brilliantly, with sensitivity and understanding, conveying a wide range of emotions. Jason Robards, on the other hand, seems to be phoning it in on a bad connection to a wrong number.


I don't wish to be cruel, but the gap between the two levels of acting here really is remarkably wide. What can account for such disparity?
Update (1 August 2012): I've been doing some work on film versions of Julius Caesar recently, and I dipped into Kenneth Rothwell's truly remarkable History of Shakespeare on Screen (for which, q.v.), where I learned at least two interesting things about this film.

1. Orson Welles had been asked to play Brutus in this film: "He was . . . called to play Brutus in the Burge / Snell Julius Caesar (1970), but for obscure reasons had to be replaced at the eleventh hour by Jason Robards, Jr." (89). The world lost something wondrous with that change—so quick bright things come to confusion.

2. Robards' performance could be read as deliberate instead of merely uninspired:


Apparently Jason Robards' low-key performance stemmed from his interpretation of Brutus as an intellectual suppressing his emotions after being traumatized by his entanglement in a political assassination. . . Robards speaks the lines [of Brutus' soliloquy] as if he "lacked affect" (in the psychological sense), totally flat and uninflected. Besides covering up any sign of emotion, Robards also conceived in some high-minded way that "rehearsing in movies should be done just before takes. Then those small spontaneous things can be retained." (154-55)

In this view, it's not awful acting; instead, it's terrible decision-making that is at the back of it. It doesn't make the acting any better, but it helps to explain how an actor who can play other roles quite well failed in this performance.
Links: The Film at IMDB.

I know that look. That's the "actor focusing far too much on remembering his lines" look.

Either that, or he's a little awestruck at the unbridled hotness of Diana Rigg, which I can't really blame him for.

I thought he did a pretty good job :)

Robards is like a fish out of water in this film: this is a surprise, as he was an experienced theatre actor. Perhaps he had little experience of Shakespeare? Throughout the film, his delivery is monotone and one-dimensional, his expression rarely changes, apart from when he shouts at the top of his voice. His excellent and thoroughly merited reputation got him the part, but it didn't guarantee a good performance. Even the then 13 year old Steven Pacy as Lucius outshines poor Robards, in his small snippets of dialogue. This is a shame, as the other main actors aren't at all bad.

I was impressed by Robert Vaughan. He & Heston showed Americans can do Shakespeare.