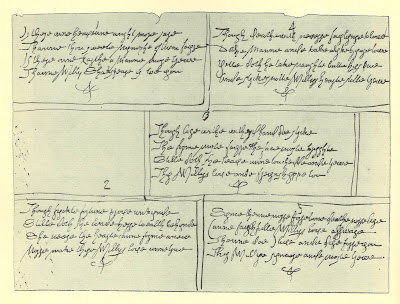 Schoenbaum, S. William Shakespeare: Records and Images. Oxford: Oxford University Press, 1981.
Last Valentine's Day, I wrote about Samuel Schoenbaum's Shakespeare’s Lives and the account of Willam-Henry Ireland's forgery of love poems from Will Shakespeare to Anne Shakespeare (for which, q.v.).

At that time, I tried to find a facsimile (as opposed to a transcription) of the original forgeries.
Perseverance paid off. I tracked down the poems in Schoenbaum's earlier work William Shakespeare: Records and Images. The image above contains "Shakespeare's Verses to Anna Hatherrewaye" (124), which is how Ireland spelled Anne's maiden name. My favorite is still the one in the image below (the transcription follows):

Is there inne heavenne aught more rare
Thanne thou sweete Nymphe of Avon fayre
Is there onne Earthe a Manne more trewe
Thanne Willy Shakespeare is toe you.

Ah, young love. It gets you every time.
Happy Valentine's Day, everyone!