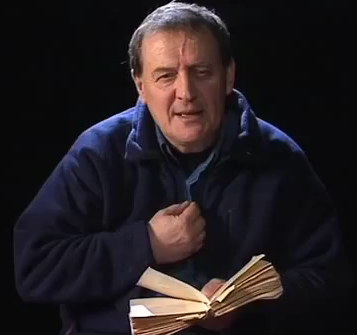 Harrision, Tony. “Them & [uz].” Selected Poems. New York: Random House, 1987. 122-23.
The Poetry Channel has a marvelous video of Tony Harrison reading his exquisite "Them & [uz]," a poem about (among other things) literature, education, received pronunciation (i.e., "The Queen's English"), and the sterilization of Shakespeare.

Harrison's reading is spot on. For one thing, he knows exactly the vowels he's talking about, and "he do the police in different voices" (T. S. Eliot's working titled for "The Waste Land") magnificently.

The poem opens with two Greek vowels ("αἰαῖ"), a sound of lament or mourning, which are immediately followed by two Yorkshire vowels ("ay, ay") that connect the ancient to the modern.

The scene changes to the image of a schoolboy reading the opening of Keats' "Ode to a Nightingale": "My heart aches, and a drowsy numbness pains / My sense, as though of hemlock I had drunk, / Or emptied some dull opiate to the drains / One minute past, and Lethe-wards had sunk" (1-4), but he doesn't get more than four words in before he's interrupted by a teacher complaining about his accent.


"Can't have our glorious heritage done to death!"

I played the Drunken Porter in Macbeth.

"Poetry's the speech of kings. You're one of those
Shakespeare gives the comic bits to: prose!" (5-8)

It's terrific—but hearing Harrison read the poem is the best way to encounter the poem:

I played the Drunken Porter in Macbeth.

"Poetry's the speech of kings. You're one of those
Shakespeare gives the comic bits to: prose!
All poetry (even Cockney Keats?) you see
's been dubbed by [^s] into RP,
Received Pronunciation, please believe [^s]
your speech is in the hands of the Receivers."

I chewed up Litererchewer and spat the bones
into the lap of dozing Daniel Jones,
dropped the initials I'd been harried as
and used my name and own voice: [uz] [uz] [uz],
ended sentences with by, with, from,
and spoke the language that I spoke at home.
RIP RP, RIP T.W.
I'm Tony Harrision no longer you!

You can tell the Receivers where to go
(and not aspirate it) once you know
Wordsworth's matter / water are full rhymes,
[uz] can be loving as well as funny.

My first mention in the Times
automatically made Tony Anthony!