Is this Joe Macbeth I see before me? 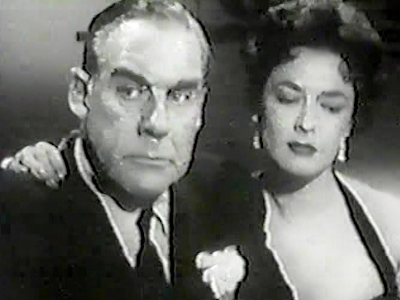 Joe Macbeth. Dir. Ken Hughes. Perf. Paul Douglas and Ruth Roman. 1955. DVD. Lear Media, n.d.I'm giving a presentation on the question "How universal is Shakespeare?" at the Guthrie Theatre tomorrow evening, and it will honestly help in my presentation if I write a brief post on Joe Macbeth.

The film is very rare—the only extant copy I've been able to find is of poor quality—and fascinating. It's a derivative version of Macbeth set in the 1950s gangster scene. When I have a bit more time, I'd like to write on the film's use of the witches. For now, I'd like to show the parallel to the dagger scene.

In this part of the film, the supernatural has been eliminated entirely. But the idea of an external force leading Macbeth on to the murder hasn't been completely internalized. We are given a Macbeth who has a horror of knives; yet, when the Lady Macbeth analogue hands him one, he accepts it—though he notes that it feels like blood. And you should note the way Lady Macbeth delivers the "Thou marshall'st me the way that I was going" line for Joe Macbeth. It becomes "The knife knows where to go, Joe—just follow it." It's quite astonishing:


We may lose something in abandoning the supernatural at that point in the plot, but we gain something in the exchange. Something tangibly human is relayed in the sweat that feels like blood and in the cold vernacular this version of Lady Macbeth speaks to Joe—and to us.Links: The Film at IMDB.