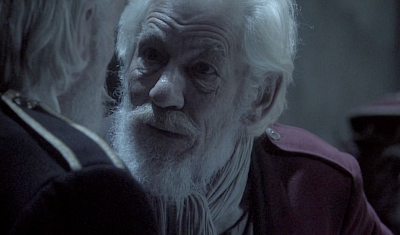 King Lear. Dir. Trevor Nunn and Chris Hunt. Perf. Sir Ian McKellen, Sylvester McCoy, Romola Garai, William Gaunt, Frances Barber, and Monica Dolan. 2008. PBS, 2009.
My word, for what it's worth, is that it's a magnificent production, astonishingly acted and inventively directed. But the reason you don't have to trust me on this is that the film is now available for free viewing! Simply head to this PBS site and dig in!

In preparation for the school year, I recently purchased the DVD; while we're on the subject, let me offer a few comments that will serve as a micro-review of the film. 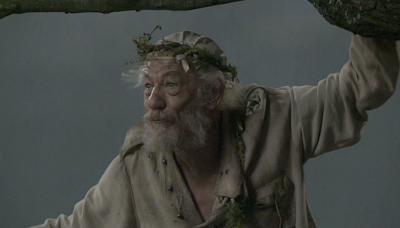 The production is beautiful rendered on DVD. I've written before about the privilege of seeing this cast perform this play at the Guthrie Theatre. Indescribable.

This video is nearly as good as being there. Certainly, it's the next best thing. The images in this post don't do justice to the clarity and detail of the video. You can see the seams of the costumes, for heaven's sake!

In addition to the stunningly effervescent acting—especially of Sir Ian McKellen and former Doctor (of Doctor Who fame) Sylvester McCoy, the decisions of the director are exceptionally interesting. There are moments that are too horrible to bear. And I suppose that's the point.

Trevor Nunn pays a considerable amount of attention to the relationship between the play's gods and the play's people. One way he does so comes near the very end of the play. Upon learning that Cordelia and Lear's lives are in jeopardy, Albany and Edgar desperately send Edmund's sword (the token of reprieve) in an attempt to stop the planned execution. The instant after the Gentleman departs, Albany says, "The gods defend them" (the text reads "The gods defend her" at V.iii.254; this change focuses our attention on the pair instead of on Cordelia alone) and each member of the entire company raises arms in supplication: 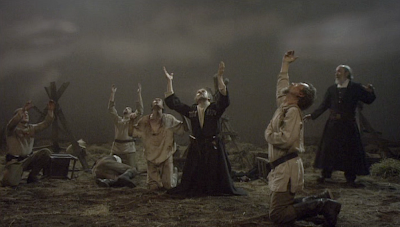 After only a few beats, Lear enters with his devastating line: "Howl, howl, howl, howl! O, you are men of stones" (V.iii.255). It's as horrific as you can imagine. And it's capped off with another line composed completely of monosyllables (Shakespeare is seldom high-falutingly verbose when he has his characters speak of the deepest emotions)—one of the most tragic lines in all of Shakespeare:

At the very end, the image of raising hands is presented again as the final speech (given, as in F, to Edgar in this production—not to Albany, as in Q) is delivered in voiceover. Edgar raises his hands and, in a gesture eloquent of despair, drops them uselessly to his sides.

It's terrible. And marvelous. But, as I said before (paraphrasing Levar Burton's Reading Rainbow phrase), you don't have to take my word for it! Watch it yourself! Enjoy!

For comparison, here's a link to Olivier's version:

I love the McKellen, but for the ending? I think Olivier does a better job.

This was a fairly good adaptation. Too bad about some of the technical errors here and there, but that's just film student nitpicking on my part.

Out of curiosity, Antigonus, which one has the errors? (Since I brought Olivier into the discussion). It's been a long time since I watched either straight through. Though I remember not liking the "arms raised up to heaven" thing in McKellen, that struck me as too theatrical for film, and broke the mood completely.

I must respectfully disagree with Duane on the raising of the hands in McKellen's version. I thought it worked well for this play's vision of divine intervention (not that I agree with that interpretation). The repetition of the raised hands toward the end under lines the message: In this version of King Lear, there will be no supernatural activity. The humans are solely responsible for their own ruin.

Oh, I *get* it, just saying that from the "real people doing real things" angle I tend to look at Shakespeare from, I thought it was jarring. If in the middle of my day I decided to drop to my knees and raise my hands to heaven, and I turned and realized that everybody else had done the same thing, my first thought would be "WTF? Why did you all just do that? That's freaking me out."

The exact reason why I think Olivier's version is so powerful, to me, is shown here as well - I don't see his performance and think "Oh, ok, interesting choice, see how he puts her down sooner, rather than carrying her around like others have done, in order to show his frailty?" I *see* a frail old man agonizing over the death of his daughter, his failed attempt to save her, and his refusal to accept reality.

Another interesting note, back to the original "howl", is that when I look at it now I see it transformed - the first one may likely have been intended as a command, but then he is completely overcome by the others until he's literally just making anguished noises, and then he comes back to the "You are men of stone" line. So they do feel connected and consistent in a weird way. He enters with a thought, fails to properly articulate it because he is too overcome by it himself, and then tries to regain his composure.

Fair enough, Duane. And I'd like to go on the record as pro-Olivier as well. That film is superior to McKellen's in a number of ways—particularly in its Regan and Gloucester. Diana Rigg is the most chilling Regan in the history of the play. Bar none.

But I still like this. The raising of hands in supplication didn't seem at all odd to me. In fact, it put me on the edge of my seat—even though I knew what was going to happen, I was desperately hoping with the characters—desperately supplicating along with them—that the messenger would arrive in time. For me, it heightened the anguish of Lear's entrance with Cordelia.

@Duane I was speaking of the one with McKellen. A really obvious one is that Lear is still clearly breathing when he's supposed to be dead (on BOTH cutaway shots). Another is in the scene where the disguised Kent makes his first appearance. I do understand that they were going for a minimalist aesthetic, but they had TORCHES back then. It was far too darkly lit. (Like that one Star Trek episode where Data was performing The Tempest).