Echoes of The Tempest in Star Trek Episodes

The first and last listed above (“Menagerie, Part I” and “Requiem for Methuselah”) have what might be called “Brave New World” moments. In the first, the crew discovers the survivors of a spaceshipwreck; the youngest was only a baby when they crashed and has never seen anyone other than the scientists with whom she was shipwrecked (something of a derivative of Forbidden Planet—which is, itself, a derivative of The Tempest—here).

The last seems even more akin to both The Tempest and Forbidden Planet (there’s even an extremely powerful robot programmed to defend its master—which is, by the way, a connection to Forbidden Planet rather than The Tempest, though Caliban serves as a model for the robot in that film). In “Requiem for Methuselah,” an older man and his young and beautiful ward are living along on a planet. For Rayna, the ward, the arrival of Kirk (et al.) reveals the “brave new world” filled with “many happy creatures.” The older man’s jealousy is akin to Prospero’s reluctance to have his daughter marry Ferdinand too quickly. 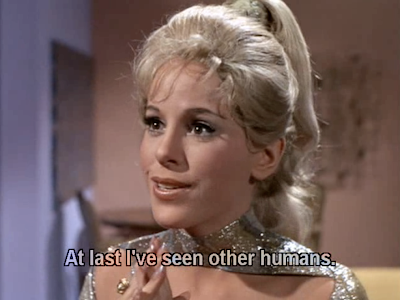 "At last I've seen other humans" = "O brave new world"
“Is there in Truth no Beauty?”—the middle episode—is slightly more tangential. It has a character named Miranda, but she’s not unacquainted with other people. She becomes intensely jealous of anyone who becomes too familiar with the ambassador that she is transporting. The ambassador is a Medusan—a being of pure internal beauty . . . and absolutely repugnant to human sight. Could this be Caliban?

The connections between these three episodes and The Tempest are intriguing, but they cannot be completely substantiated.

Next time, I’ll argue that “Elaan of Troyius,” the episode most frequently cited as a parallel to The Taming of the Shrew, has more affinities with Antony and Cleopatra—and even a Hamlet-related moment! Stay tuned!P.S. The "Requiem for Methuselah" episode needs some clarification, especially in light of the Wikipedia article on it, which currently states that Flint possesses "original copies of Shakespeare" (which I take to mean manuscripts in Shakespeare's hand). The older man on the planet has lived for centuries. He was Johannes Brahms, Leonardo Da Vinci, and many other famous people—but he was not necessarily Shakespeare. The Wikipedia entry is misleading in this regard (at least, it is in its current incarnation). Flint (the older man) owns a First Folio of Shakespeare (see image below), but there's no indication that he has any manuscripts in Shakespeare's hand. I'd correct the Wikipedia entry, but it's nice to be smug about something! Indeed, that may be what Flint is feeling so smug about in the image below. 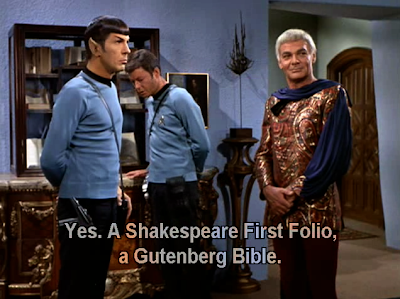