The Three Fates: King Lear in Vietnam and France 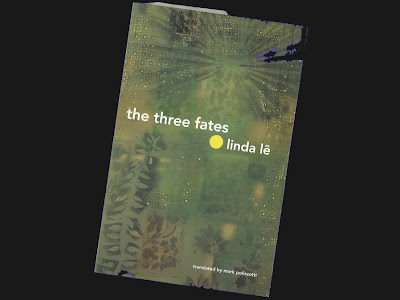 Lê, Linda. The Three Fates. Trans. Mark Polizzotti. New York: New Directions, 2010.
Linda Lê's 1997 novel, recently released in an English translation, is one of the most challenging and most rewarding novels I've read—and, yes, that includes Ulysses. The work reads much more like a prose poem—a prose epic poem—than anything else.

Even though one of the main characters goes by the soubriquet "King Lear," don't expect the plot to be the same as Shakespeare's play. The plot plays with Shakespeare's play by telling the story of three granddaughters (two sisters and their cousin) who were brought to France from Vietnam by their grandmother and who are planning to get the two sisters' father (who stayed in Vietnam) to visit them in France.

Within that very basic plot structure, an infinite amount of beauty and amazement rest. The three granddaughters—usually referred to as Southpaw (who is missing her left hand), Long Legs (who is the great beauty of the family), and Cousin—are portrayed with as much intensity as Cordelia, Goneril, and Regan. 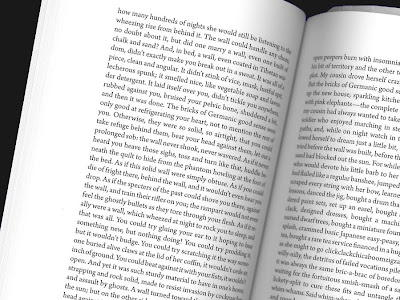 The text is rich and dense. A glance at the pages shows that paragraphing is not one of the conventions followed by this novel. Indeed, there are very few section breaks; the text flows delightfully on and on, subtly shifting point-of-view and setting, changing the nicknames of the main characters, their friends and relations, and the novel's locales. The novel demands (and rewards) attentive reading in this and many other regards.

The extract below should whet your brain's appetite for more. The passage describes Long Legs, who is pregnant, and her journey to her pregnancy. The best advice I have about it is to read it out loud. Really. You might start to sound like a Beat Poet, but the rhythm and the music of the words is part of the meaning of the passage. I'm eager to read the French original to see how it sounds and to explore how the translator managed to create something so astonishing.


For while waiting for the demigod who would devote his little barb to her alone, the brazen hussy had flailed like a regular banshee, jumped one joker after another, scraped every string with her bow, learned the guitar in ten easy lessons, danced the jig, bought a drum that went chica-boom, ordered paint sets, set up an easel, bought a box that went click-clack, designed dresses, bought a machine that went zigzag, nursed dwarf trees, bought a miniature fountain that went splish-splash, crammed basic Japanese easy-peasy, mimicked the art of tea, bought a rare tea service financed in a hugger-mugger, but try as she might to go clickclackchicaboomzigzag, the days went by willy-nilly, the detritus of failed vocations piled up pell-mell, and it was always the same bric-a-brac of boredom that found itself waiting for the fortuitous smish-smash of a savior who burst in lickety-split to cure these fits and untangle this mish-mash of whim-whams. Said whim-whams had spun my cousin's head round and round, emptied her pockets, left her still yearning to stock her little boutique with an extra measure of heart. The savior who fell from heaven reached under the detritus of failed vocations and pulled out a lost soul eager to be branded, to sell off her cartload of whim-whams, swap the extra measure of heart for a gleaming kitchen, trade in the boxes that went clickclackchicaboom for a mewling blob of jelly that went waah waah at any hour of the day or night. For in all her zigzagging, the lost soul had forgotten the tick-tock of age. While she was frolicking, time had pursued its game of tic-tac-toe. And once the clickclackchicaboom was over and done, the clock began tick-tocking something fierce in the whim-wham graveyard. The savior dropped in just in time to pluck the ripe fruit. The green was turning mauve. The pink was getting dusky. The bell was tolling for her youth, drowning out the caterwaul of strings fiddled a-go-go. Her whim-whams now stowed in the attic, the lost soul devoted her life to the savior who had dropped into her bed, calm block here fallen from a celestial joy. A flawless brick, all smooth, square, and dry, the heart of the wall, which had reared up without warning, blocking out the sun. But behind the wall, the lost soul had her spanking new enclosure, bricks of good sense on which to lay her head and, soon, a demi-god who would go waah waah then clickclackchicaboomsplishsplash, carving out his own little slice of heart before getting his own spanking new enclosure and, inside it, a mewling demigod who'd go waah waah before sounding all the bells and whistles. All super-duper and hunky-dory, everything ship-shape. (49-50)

The brain whirls, but it is delighted at the number of synapses that start firing, intrigued by the connections and interconnections it finds, and joyful in the knowledge that it is being caught up in a whirlwind of knowledge.

You will need to take your time with this novel, but you will not regret it.

Click below to purchase the novel from amazon.com
(and to support Bardfilm as you do so).