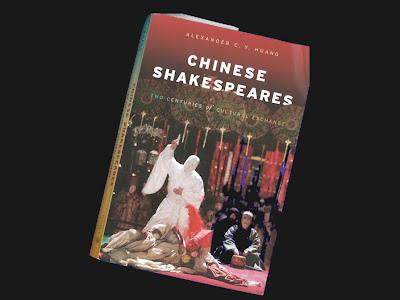 Huang, Alexander C. Y. Chinese Shakespeares: Two Centuries of Cultural Exchange. New York: Columbia University Press, 2009.
I've written a longer review of this book that I hope will be published in the medium of print in due course of time. In the meantime, I'd like to call everyone's attention to the book and mention one of the chief points of interest and utility that the book offers (one not mentioned in the longer review).

For those who are interested in the connections between Shakespeare and Asia, Chinese Shakespeares is the book. My own interest is particularly centered in Shakespeare and Vietnam—Vietnamese Shakespeares, to follow the nomenclature of Huang's book—and this book provides an essential vocabulary for such study and a model examination of one country's engagement with Shakespeare.

Among much else, Huang offers a useful set of categories for the ways Shakespeare and China have interacted:

1. Universalization. For Huang, "universalization" means playing Shakespeare straight. A given play, translated into Chinese, is presented without deviation from its plot or characterization. If the play seems “foreign” to its Chinese audience, that demonstrates its authenticity. The purpose of such production is exposure to western thought, modes of expression, or ways of life.

3. Truncation. Truncation involves rewriting the plays “so as to relate them to images of China” (17). In this approach, considerations of plot are secondary to turning the narrative into something that might be considered more typically Chinese.

These categories are useful as starting points for studying the uses to which Shakespeare is put in any culture. Naturally, some moments of Shakespearean interaction will fit more neatly into these categories than others.

My longer review talks about all the particular instances of Chinese Shakespeares that Huang examines—all of which are fascinating. Bardfilm has dealt with at least one of them: The Legend of the Black Scorpion (for which, q.v.). And I intend to address others when possible.

Huang's book is magnificent for showing how both China and Shakespeare can be changed into something rich and strange as they interact.