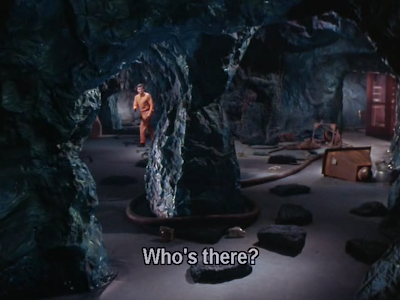 “The Devil in the Dark.” By Gene L. Coon. Perf. William Shatner, Leonard Nimoy, DeForest Kelley, and Nichelle Nichols. Dir. Joseph Pevney. Star Trek. Season 1, episode 25. NBC. 9 March 1967. DVD. Paramount, 2007.More than a year has passed since Bardfilm put together the definitive and complete post on all the Shakespeare that appears in Star Trek.

Alas, we spoke too soon.

This week, Bardfilm will be filling in the blanks and adding these new comments—retroactively, as it were—to the "Shakespeare and Star Trek Complete" post.

Picture the scene for this Shakespeare allusion. A single guard paces the battlements. Strange things have been happening in this Elsenore-esque place. Hearing a noise behind him, the guard turns and delivers a line—the first line, in fact—from Hamlet: “Who’s there?” (I.i.1):


The only problem is that the Francisco analogue blows his line. Instead of a good and proper "Nay, answer me: stand, and unfold yourself" (I.i.2), we get an "It's your relief, Sam." Ah, well. You can't ask for everything! At least we get the setting and the first line, even if no further allusions to Hamlet appear in this particular episode.
P.S. We don't even get a "For this relief, much thanks" (I.i.8), though it would be an entirely appropriate response to Francisco's altered line. Links: Shakespeare and Star Trek Complete.
Copyright 2008-2039 by kj at 5:00 AM