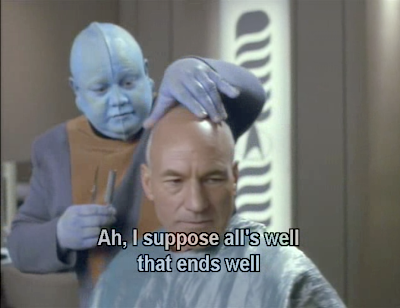 The Barber of The Enterprise rattles on and on at the beginning of this episode—rather like Polonius, come to think of it—until he finally hits upon a quote from Shakespeare. It's a bit like an infinite number of monkeys typing away at a keyboard, I suppose—though that may not really give Mot his due.

I love the Star Trek theme you've had recently! One of my favorite Shakespeare/Trek moments has to be (forgive me if you've done this one already and I missed it) when Q is in Picard's ready room, holding Picard's complete works and making fun of humanity. Picard says, "What Hamlet said with irony I say with conviction: 'What a piece of work is man! How noble in reason, how infinite in faculties, in form and moving how express and admirable, in action how like an angel, in apprehension how like a god!'" I can't find it on YouTube, though.

Thanks, Mark! Yes, that's a good one. You'll find it here:

And you'll also find it in the "Shakespeare and Star Trek Complete" post--which is growing larger every day: