Young Adult Verse Novel with Shakespeare in the Title 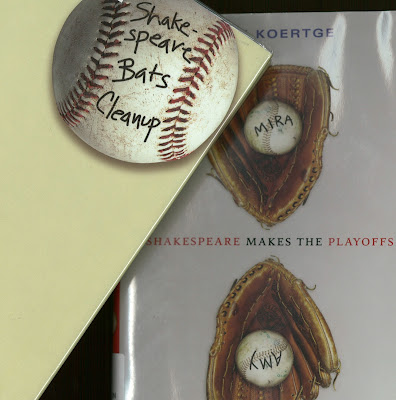 Koertge, Ron. Shakespeare Bats Cleanup. Cambridge: Candlewick Press, 2003.
———. Shakespeare Makes the Playoffs. Cambridge: Candlewick Press, 2010.
Apart from the title, there’s not a lot of Shakespeare in these two books—but the premise is interesting. The narrator is composing poetry while convelascing, and the narrative unfolds through the poems he writes. He’s a bit ashamed of being a poet—he doesn’t want to earn the nickname “Shakespeare,” and he'd rather be playing baseball—but, though the course of the book, he becomes accustomed to the idea and comes to enjoy being a poet.


The best poem of the bunch is one called “How do you do, Haiku,” and it appears in the first volume:


How do you do, Haiku

I thought I’d start small. I kind of
remember haiku from school last year.
I at least remember they’re little.

But, man—I never saw so many frogs
in the moonlight. And leaves. Leaves
all over the place.

Still, haiku look easy. Sort of. Five
syllables in the first line, seven
in the second, five in the third.

At least I finished it. I can’t finish anything
else, except my nap. Seventeen syllables
is just about right for somebody with my
reduced stamina. Perfect thing for an
invalid.

Oh, man—look at that: in valid. I never
saw that before.


Just a single space
in a word I thought I knew
made the difference.

That's a good, reasonable, humorous build-up to a nice payoff. It may not be a haiku home run, but it's at least a double—possibly even a triple. In any case, that's the poem that made checking out the book worthwhile.

All in all, Shakespeare Bats Cleanup is not bad, even if it lacks any close Shakespearean connections (which, I realize, it wouldn't be fair to demand—though it might be fair to expect). Shakespeare Makes the Playoffs is a bit disappointing—the first of the two books is the better one.