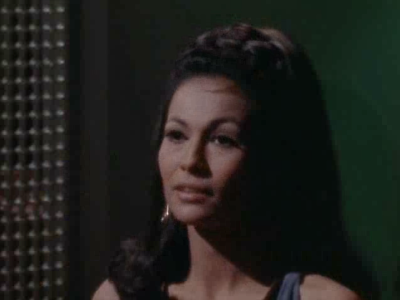 “Mirror, Mirror.” By Marc Daniels. Perf. William Shatner, Leonard Nimoy, DeForest Kelley, and Nichelle Nichols. Dir. Jerome Bixby. Star Trek. Season 2, episode 4. NBC. 6 October 1967. DVD. Paramount, 2007. Shakespeare tends to show up in alternate universes, and I find that encouraging. I would rather not deprive any universe of its Shakespeare—whether it’s the Star Trek universe or an alternate universe within the Star Trek universe.
In "Mirror, Mirror," several members of the Enterprise crew have inadvertently switched places with their counterparts in a universe that is much harsher and infinitely more cutthroat than their own.

When he heads to his alternate-universe quarters, the Captain Kirk we know is surprised to find a woman there. He’s also surprised to find out how conniving and power-hungry she is. Because Kirk is behaving unusually and is being unusually reserved in sharing confidences with her, Lieutenant Marlena Moreau assumes he’s found a way to be ambitious beyond the dreams of avarice. She says, “If I’m to be the woman of a Caesar . . . can’t I know what you’re up to?”

Of course, merely mentioning Caesar doesn’t automatically guarantee a Shakespeare allusion. But more than the name is at work here. In Julius Caesar, we find a parallel scene. Portia stands in a similar situation when Brutus declines to share his thoughts with her. She asks to share his confidences with these words:

Within the bond of marriage, tell me, Brutus,
Is it excepted I should know no secrets
That appertain to you? Am I yourself
But, as it were, in sort or limitation,
To keep with you at meals, comfort your bed,
And talk to you sometimes? Dwell I but in the suburbs
Of your good pleasure? If it be no more,
Portia is Brutus' harlot, not his wife. (II.i.280-87)

I admit that “If I’m to be the woman of a Caesar . . . can’t I know what you’re up to?” is a poor substitute for this majestic and affecting speech, but the circumstances and the emotions of the two women match up. Observe:


Another avenue for exploration—additional evidence that Julius Caesar may be behind this reference—might be found in the fact that the alternate universe is something like the Roman Empire at its worst. Assassination is a common means of advancement—indeed, an attempt had been made on Kirk’s life by a member of his own crew before this scene takes place. But that possible deeper analysis is beyond the scope of this post.
Links: Shakespeare and Star Trek Complete.
Copyright 2008-2039 by kj at 5:00 AM