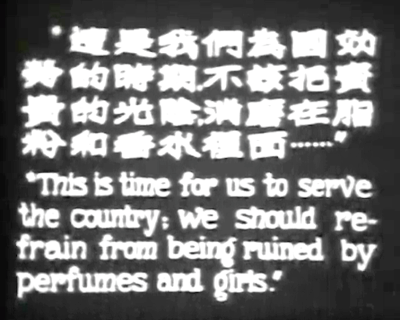 One of the Chinese Shakespeares Huang addresses at length is a 1931 silent film derivative of Two Gentlemen of Verona entitled A Spray of Plum Blossoms. The film is quite interesting. Its title cards appear in Chinese and English (see above), which may indicate something of the audience toward which it was directed.

The scene below is analogous to Act I, scene ii of Two Gentlmen. Julia receives a love letter from Proteus, tears it up out of pride (she doesn't want to be seen as in love before her maid), and immediately regrets it:


I'm particularly fond of the way the vertical Chinese title card fades into the horizontal English title card. The maid, too, plays her part to perfection. The rhythm of her entrance and exit with a dustpan toward the end is admirable.

I'll leave the deep analysis of the film to Huang—you'll find it in his book—but I hope this brief clip (the film itself runs well over an hour and a half!) interests you enough to try either the film or the book.
Links: The Film at IMDB.