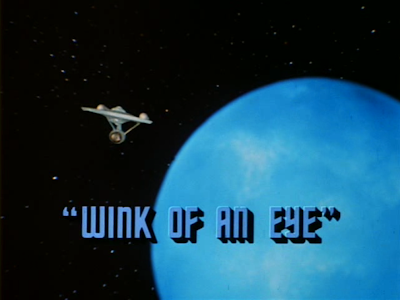 It falls into the category of Shakespearean titles for Star Trek episodes. "Wink of an Eye" is a phrase whose first extant use is in Shakespeare's A Winter's Tale. The character who speaks it is "First Gentleman"; his main role is to report the events surrounding the off-stage recovery of the King's lost daughter. In his exit line, he declares himself anxious to get back to seeing the spectacle rather than reporting on it: "Who would be thence that has the benefit of access? Every wink of an eye some new grace will be born. Our absence makes us unthrifty to our knowledge. Let's along" (V.ii.109-12).

The title card above will suffice as evidence of this Shakespearean title, but a relevant excerpt from The Oxford English Dictionary would not be amiss (click on the image below to enlarge it):

[Editor's Note: I wonder why the phrase "It happened in a nictitation of the eyelid" never became common.]
Making deeper connections between the episode and the play from which its title may be taken cannot be made with any certainty. The phrase had become, by the 1960s, common enough that its use here may not be specifically from Shakespeare. However, there is one interesting parallel. The episode involves beings who live at such a high rate of speed that other beings appear to be statues; the play involves a woman who appears to be a statue but who [spoiler alert] re-animates herself at the end of the play. But I won't press that point!
Links: Shakespeare and Star Trek Complete.
William Shakespeare at Memory Alpha
Copyright 2008-2039 by kj at 5:00 AM