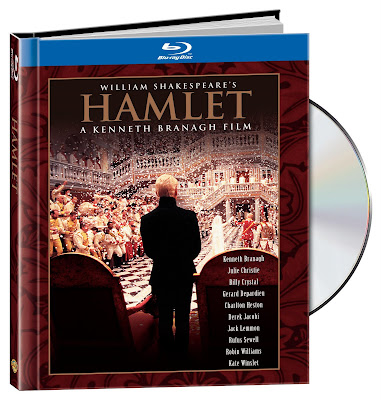 The good people at Warner Bros. sent me an advance copy to review. The book is gorgeous and extremely well-designed. In the trivia section, I learned that this production marks the first time Jack Lemmon (Marcellus) had ever played a Shakespearean role!

Here's a brief clip of an interview with Branagh: 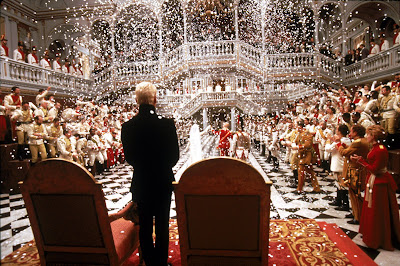 I have not yet had a chance to view the material on the disc itself—Bardfilm has no Blu-ray player but had naïvely assumed that the disc would play in any relatively-new computer!—but I wanted to get the word out about this release. I'll provide a more extensive review of the particulars of the Blu-Ray edition when I'm able to view them. In the meantime, you can be assured that the production itself is lavish and extravagant and amazing (which isn't to say that I agree with everything in the production—Jack Lemmon's first Shakespearean role could have been better acted, for example).

But whatever media brings the original experience of seeing this film in its full 70mm grandeur closer is to be admired. And Warner Bros. is to be commended for releasing the disc in this format.
Links: The Film at IMDB. Get the inside scoop on WB movie & DVD releases. Check out the official site.

Click below to get the film on Blue-ray from amazon.com
(and to support Bardfilm as you do so).

I was unable to review when they asked (I have no Blu-ray player), but I did swing a couple of copies to giveaway: