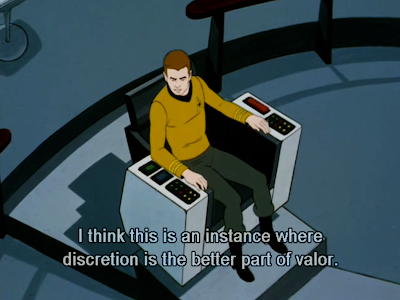 The first is based on a speech from 1 Henry IV. Falstaff says, "The better pat of valor is discretion, in the which better part I have sav'd my life" (V.iv.119-21). Kirk's version is the usual paraphrase: "Discretion is the better part of valour."

Kirk also modifies Polonius' "Though this be madness, yet there is method in't" (II.ii.205-06), giving us "There is a method to this madness” in place of the more cumbersome phrase:


And the idea that The Enterprise is seeking revenge makes the entire episode into a Hamlet derivative!