Harry Mudd Quotes As You Like It; James Kirk Quotes Hamlet 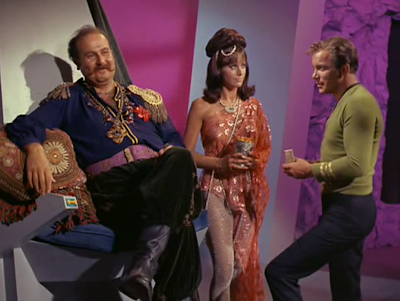 Harry Mudd, in responding to a series of accusations from Kirk, ends the inquisition by saying, “And thereby hangs a tale.” He’s quoting Jaques (who is, in his turn, quoting Touchstone) in As You Like It.

[Note: A similar line occurs in Othello: "O, thereby hangs a tale" (III.i.8).
Later, Kirk, in an attempt to confuse the logic circuits of the robots that hold them all prisoner (I’ll spare you the details), asks one of Hamlet’s rhetorical questions: “What is a man?” It’s similar to the “What a piece of work is a man!” speech he gives Rosencrantz and Guildenstern in Act II, scene ii. But it’s exactly like the speech he makes while pondering Fortinbras’ sally on Poland:

At the end of his speech, Norman (the chief android) points out that "Dreams are not real." I think Kirk is about to launch into “I could be bounded in a nutshell,” but the plot moves on before he can do so: