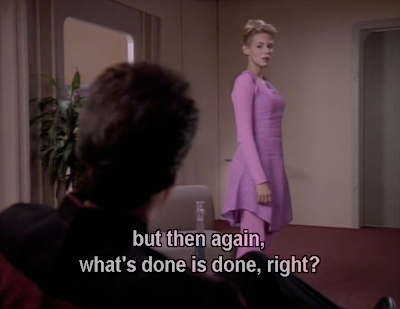 "True Q" offers another example of Shakespeare that has become part and parcel of ordinary English conversation. Q incidentally quotes from Macbeth, giving us Lady Macbeth's "What's done is done" (III.ii.11-12). I only wish the writers had followed it with Lady Macbeth's similar—but, oh! How different—later quotation: "What’s done cannot be undone" (V.i.64).

Hmmm... "What's done is done" is a pretty common phrase. I wonder if it has Macbethian origins? (Yes, I just made that word up.) Interesting. Good catch.