Where to Find Shakespeare Quartos On-Line 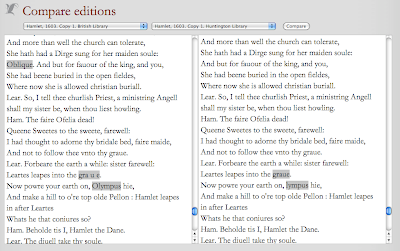 The Shakespeare Quartos Archive compares two copies of Q1 of Hamlet that are physically located roughly 5,431 miles apart. A few small flurries of interest in The Shakespeare Quartos Archive have been fluttering around recently, and it is a magnificent endeavor. Currently, a very large number of Hamlet quartos are available for instantaneous comparison, with differences between the texts helpfully highlighted in the text display.

It's lovely, and it will become even more lovely as quartos from other plays are added.

I'm still very fond of The British Library's on-line quarto holdings, so don't leave them out of the picture!

At some point, I'd like to sit down and do a detailed analysis of the various quartos of Hamlet for myself. My starting point will be simply reading through Q1 of the play to see what we might make of it. Can anything, for example, be deduced about Hamlet's relationship to Ophelia by an examination of Q1 alone? Alas, that must wait until another day.Links: The Shakespeare Quartos Archive. The British Library.
Copyright 2008-2039 by kj at 9:59 PM