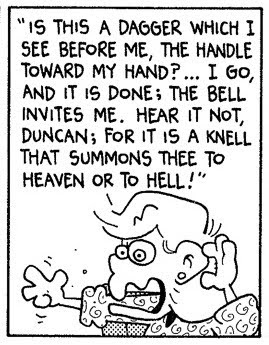 Amend, Bill. Take us to your Mall: A FoxTrot Collection by Bill Amend. Kansas City: Andrews and McMell, 1995.
Shakespeare, in popular culture, is not limited to television shows and movies. He and his works often show up on the comics page.

Although the general topic is too large to be covered in a blog devoted (primarily) to Shakespeare and film, we can take a look at FoxTrot's use of Shakespeare.

Bill Amend frequently has his characters engage with the works of Shakespeare. Andi, the mother of the family, was an English major, and she's constantly thrilled and depressed at the ways in which her offspring deal with literature. Among the most memorable is the Macbeth series that appears on pages 43 and 44 of the work cited above.