The Beatles and Shakespeare, Take Two 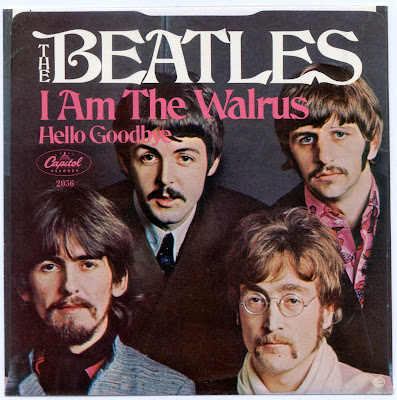 The Beatles. "I am the Walrus." By John Lennon and Paul McCartney. Magical Mystery Tour. 1967. EMI, 2009. CD.
The Beatles played a scene from Midsummer Night's Dream, but they also—however unwittingly—incorporated portions of King Lear into one of their songs.

"I am the Walrus" contains, among much else, a radio spinning between stations—mostly static-filled ones—one of which was broadcasting an audio production of King Lear. I will be trying to track down a more scholarly source than my own memory, and I'll update this post when I get that material. In the meantime, I re-listened to the track from an earlier CD release than the most current, and, just after the two minute mark, some indistingishable (to me) words come in (it sounds like "What light," but there's nothing with those sounds anywhere near the rest of the words from Lear). Then, right after the "Sitting in an English garden, waiting for the sun. / If the sun don't come, you get a tan from standing in the English rain" pair of lines, the lines "Now, good sir" and "poor man, made tame to fortune's . . . good pity." The lines are part of an exchange between Gloucester and Edgar at a point where Gloucester has been blinded and met the mad King (sorry if any of these are spoilers) and while Edgar is still disguised. Here's the more complete exchange:


Gloucester: Now, good sir, what are you?

Edgar; A most poor man, made tame to fortune's blows,
Who, by the art of known and feeling sorrows,
Am pregnant to good pitty. (IV.vi.220-23)

The broadcast seems to progress at the right speed for the scene to pick up at 3:51 in the song with Oswald's lines after Edgar has fought and overcome him:


Oswald: Slave, thou hast slain me. Villain, take my purse:
If ever thou wilt thrive, bury my body,
And give the letters which thou find'st about me
To Edmund earl of Gloucester; seek him out
Upon the British party: O, untimely death!
Death!

Edgar: I know thee well; a serviceable villain,
As duteous to the vices of thy mistress
As badness would desire.

Gloucester: What, is he dead?

The Wikipedia entry points out that these lines formed part of the "Paul is dead" theory. Note, however, that no direct answer is given in the song, even though Edgar says, "He's dead" just two lines later. I don't know if anyone ever considered Paul's line "Now am I dead" from the Midsummer Night's Dream scene, but it could be used as evidence: those who are able to say "I am dead" are seldom (if ever) actually dead.
Links: The Wikipedia entry on the song.

Thanks. I was looking for exactly that; which song had the Shakespeare. Oh! Untimely death. I want to use that myself. Any idea what radko play it would have been from?

Well, the song is "I am the Walrus" (see above). The play is King Lear, but I don't know which particular station or company was broadcasting it at the time.

Could "what light" be from Romeo's "what light from yonder window breaks"? It seems possible from the next couple of syllables; of course, it's not much to go by.

Thanks, Montreal. I've been thinking about this since you posted it. I don't think it can be from another play since the recording was based on what was being broadcast live at that moment. They didn't cull different clips from different plays for it. But I'm going to re-listen to the song with the text of the play in hand to see what it might have been.

Well, I've done what I can, but I'm unable to make out exactly what they're saying or to find a corresponding sound that is similar in King Lear. But it is pretty clear that it's either from King Lear or from some other program being broadcast—and that's unlikely to have been another Shakespeare play.