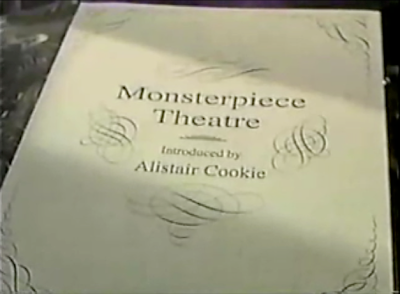 Sesame Street. 1969-present. [The number of seasons and episodes and the paucity of information about them makes more precise citation, I'm afraid, impracticably difficult.]
When I posted a link to Patrick Stewart's appearance on Sesame Street, I suspected that I had only scratched the surface. But I didn't realize how deep below the surface of the show Shakespeare runs until I read Mad Shakespeare's paean on the subject.

I'm undoubtedly indebted to them for pointing out the following clip, which seems inspired by the Weird Sisters:

But I'm even more stunned by this Monsterpiece Theatre episode (I never knew this existed), with its marvelous riff on Hamlet:


And, yes, that is Mel Gibson.

By the way, a Muppet Show episode (let's leave off the great Sesame Street v. Muppet Show debate for another time, shall we?) has Christopher Reeve doing something similar with Hamlet, Kermit, and the gang (I've been holding off on writing about it until the DVD of that season is officially released).

The good people of Mad Shakespeare don't mention "Omelet, Prince of Dinner" (for which, follow this link) but that may be because it isn't that good. They do mention "The Taming of the Shoe," which also isn't very good, so perhaps that hypothesis won't hold water. The "Taming" segment is mainly a title reference (even though there is—as you'd expect—an unruly shoe).

Finally, they mention the Monsterpiece Theatre segment entitled "Monsters of Venice." The sketch in general gets a little sketchy (by which I mean it becomes too dull too quickly), but there is one stupendous moment when Grover, spokesmonster for the Monsters of Venice (who feel marginalized because they have not been invited to the party), delivers a portion of the "If you prick us, do we not bleed" speech (III.i.64ff):

Note: I thought it best to give the scene in abbreviated form here. The notorious "pound of fur" scene doesn't really carry much weight.
Links: Sesame Street Episode Guide at IMDB.
Copyright 2008-2039 by kj at 6:43 AM

Just found another one! Sesame Street episode 1186, Time stamp 25:55. This sketch involves David getting the gang to sing "One of these things" to point out that Gladys the cow is different. This predicament prompts Gladys to realize the group has pointed out her differences. She begins her lament with "Hath not a cow eyes..."

Thanks, Mr. Snelgrove! That's delightful. I'll try to track it down.