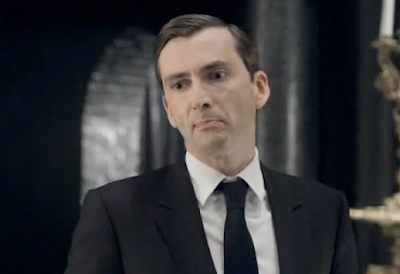 Hamlet. Dir. Gregory Doran. Perf. David Tennant, Patrick Stewart, Penny Downie, Oliver Ford Davies, and Mariah Gale. 2009. BBC Broadcast Scheduled.I keep reminding myself not to judge a film on a two-minute (nay, not so much, not two) video clip, but I'm afraid I'm not entirely encouraged by this preview of David Tennant as Hamlet.

It may just be that I had enormously high expectations for this production. It may be that I need to see the entire show before making a judgement. But it seems like Tennant is playing Hamlet as if Hamlet were Bertie Wooster intimidated by one of his aunts.

But that may, perhaps, be the point:

Having seen the production on stage, I would urge you to hold judgement until you see the whole thing. I'm confident that you won't be disappointed.

I'm very happy to receive that reassurance. And now I'm jealous that you got to see the live stage production!

I was blessed last year with the opportunity (on separate occasions) to see 'Hamlet' and 'Love's Labours Lost' in Stratford-upon-Avon. I feel that both productions deserved to be filmed, and I hope that the success of Hamlet's transition to DVD will prompt those involved to look into it. They're currently filming Patrick Stewart's 'Macbeth', so there's hope yet ..

It seems to be helygen's new goal in life to make me ever more jealous! I do hope that Tennant's Love's Labour's Lost will also be filmed and released on DVD. In some ways, that would be even more intriguing, as comparatively few film versions of that play exist—especially when compared to Hamlet productions!