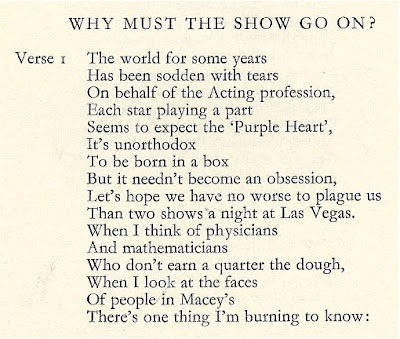 Coward, Noël. “Why Must the Show Go On?” The Lyrics of Noël Coward. London: Heinemann, 1965. 355-57.
A Midwinter’s Tale [a.k.a. In the Bleak Midwinter]. Dir. Kenneth Branagh. Perf. Richard Briers, Hetta Charnley, Joan Collins, Nicholas Farrell, Mark Hadfield, Gerard Horan, Celia Imrie, Michael Maloney, Jennifer Saunders, Julia Sawalha, and John Sessions. 1995. Videocassette. Turner, 1999.
Branagh’s A Midwinter’s Tale (for which q.v.) is brilliant beyond bearing, but we shouldn't overlook Noël Coward's contribution. The opening sequence of the film uses one of his songs, and that song has been running through my head. Coward is a brilliant lyricist—something of a cross between P. G. Wodehouse and Lennon / McCartney and Gilbert & Sullivan. This song (see the lyrics below) is particularly amazing. It strikes me as something a Fool in a modernized King Lear would sing:


Why must the show go on?

The world for some years
Has been soddden with tears
On behalf of the Acting profession,
Each star playing a part
Seems to expect the ‘Purple Heart’,
It’s unorthodox
To be born in a box
But it needn’t become an obsession,
Let’s hope we have no worse to plague us
Than two shows a night at Las Vegas.
When I think of physicians
And mathematicians
Who don’t earn a quarter the dough,
When I look at the faces
Of people in Macey’s
There’s one thing I’m burning to know:

Why must the show go on?
It can’t be all that indispensable,
To me it really isn’t sensible
On the whole
To play a leading role
While fighting those tears you can’t control,
Why kick up your legs
When draining the dregs
Of sorrow’s bitter cup?
Because you have read
Some idiot has said,
‘The Curtain must go up’!
I’d like to know why a star takes bows
Having just returned from burying her spouse.
Brave boop-a-doopers,
Go home and dry your tears,
Gallant old troupers,
You’ve bored us all for years
And when you’re so blue,
Wet through
And thoroughly woe-begone,
Why must the show go on?
Oh Mammy!
Why must the show go on?

We’re asked to console
With each tremulous soul
Who steps out to be loudly applauded,
Stars on opening nights
Sob when they see their names in lights,
Though people who act
As a matter of fact
Are financially amply rewarded,
It seems, while pursuing their calling,
Their suffering’s simply appalling!
But butchers and bakers
And candlestick makers
Get little applause for their pains
And when I think of miners
And waiters in ‘Diners’
One query for ever remains:

Why must the show go on?
The rule is surely not immutable,
It might be wiser and more suitable
Just to close
If you are in the throes
Of personal grief and private woes.
Why stifle a sob
While doing your job
When, if you use your head,
You’d go out and grab
A comfortable cab
And go right home to bed?
Because you’re not giving us much fun,
This ‘Laugh Clown Laugh’ routine’s been overdone,
Hats off to Show Folks
For smiling when they’re blue
But more comme-il-faut folks
Are sick of smiling through,
And if you’re out cold,
Too old
And most of your teeth have gone,
Why must the show go on?
I sometimes wonder
Why must the show go on?

Click below to purchase the film—or the shooting script!—or the book of Noël Coward lyrics!—from amazon.com
(and to support Bardfilm as you do so).

Thanx so incredible much :)! Simply love this song and was searching for it for such a long time. Hopefully the movie will be on dvd one day.