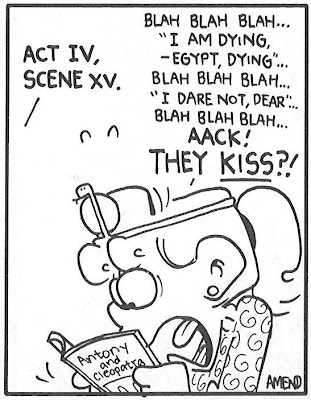 Amend, Bill. The Return of the Lone Iguana: A FoxTrot Collection by Bill Amend. Kansas City: Andrews and McMell, 1996.
Paige's encounter with IV.xv is fabulously well-worded: Indeed, it flows like a poem:

He's even there in the background of the final panel of that strip, still making googly eyes!

The stage direction in question must appear in Paige's edition—whatever it is. It probably takes place after these lines: "Quicken with kissing: had my lips that power, / Thus would I wear them out" (IV.xv.39-40).

And now we can examine the remaining seven strips in the series.

Those strips are reprinted as part of this review of the book—a book so magnificent in its purport, so glorious in its wording, so generous in its art that the world would be empty and hollow without it.

Click on each strip below to enlarge it (if you feel it is necessary to do so): 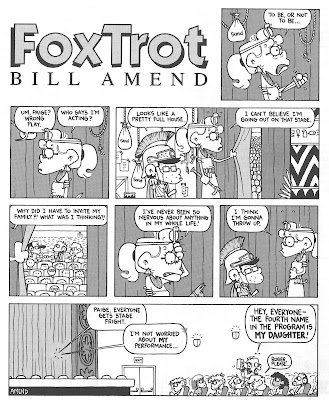