Don't be Sharper than a Serpent's Tooth 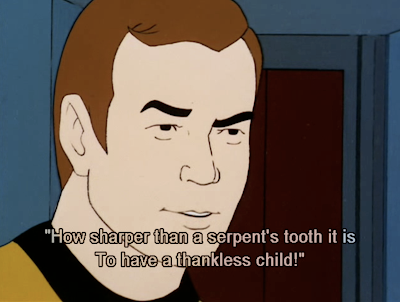 As a reminder and an object lesson, here's a clip from Star Trek: The Animated Series! Animated Kirk begins the clip by saying "Just an old, lonely being who wanted to help others." That's not a direct reference to Lear—it's to some sort of ancient Aztec alien that they've just encountered. But it might actually be one way of reading his character.

In any case, the message is the same. We desire others to be thankful:


Happy Thanksgiving, everyone! And keep those serpent's teeth to yourselves!
Links: A Gateway to Star Trek Information at Wikipedia.