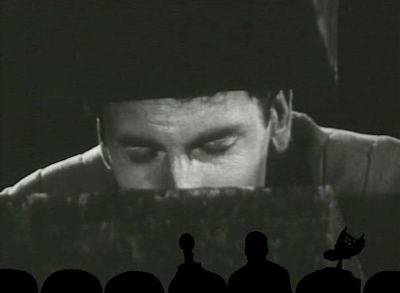 “Hamlet.” By Joel Hodgson and Paul Chaplin. Perf. Kevin Murphy, Michael J. Nelson, Mary Jo Pehl, Bill Corbett, and Patrick Brantseg. Dir. Kevin Murphy. Mystery Science Theater 3000. Season 10, episode 9. Sci-Fi Channel. 27 June 1999. DVD. Rhino Theatrical, 2003.
The main reason I never mentioned this Hamlet-related pop-culture artifact is that it's extraordinarily difficulty to cite properly! The title of the episode is "Hamlet," but that's the title of the film that the episode screens (as well as the title of its main character). Should it be underlined? Should it be in quotation marks? Should it be underlined and in quotations marks? Aargh!

The secondary reason is that seeing the episode was a fairly-extensive letdown. I was never an enormous MST3K fan, but I enjoyed the late-night hilarity whenever it came my way. This episode (very late in the program's run) is disappointing.

Yet there are just a few brilliant gems:

The other difficult part to cite is the film within the film. It's an English-dubbed version of a 1961 German television broadcast (entitled Hamlet, Prinz von Dänemark in German) that starred Maximilian Schell as Hamlet. The dubbing stars the voice of Ricardo Montalban as Claudius—and that is probably the best part of the film. The film itself doesn't seem to be available through normal channels in the United States.
Links: The Film at IMDB.